Last week I accidentally listened to a Linda McCartney track. I didn't mean to. It just came on the player.

While I realise there may be some out there who truly believe Cook of the House is an all time classic, it's not something I ever choose to listen to for pleasure. In fact I usually skip that track while listening to Wings At the Speed of Sound. 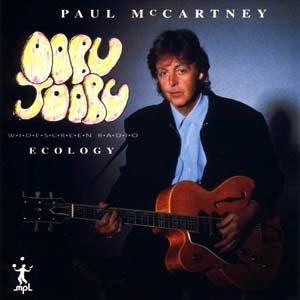 But it wasn't that track or even that album on this occasion. I was listening to a Paul McCartney sampler - Oobu Joobu Ecology. It's an episode from his Oobu Joobu radio show, where Paul played DJ and reminds us that we should be elated he went into making music instead. This disc highlights the episode where McCartney gets all preachy on the environment, animal rights and vegetarianism. And there's not much worse than when he does that. One thing that is worse, is when Linda does it in song.

Linda wrote and recorded this little ditty called Cow, and Paul, being Paul, just had to include it. Frankly it's awful. Embarrassing. And halfway through I suddenly realised that it could have been sung by Yoko, my other favourite non-singing ex-Beatle spouse. The phrasing, the tonal qualities, the lack of talent - it could have been a Yoko song.

That's one thing Linda and Yoko shared. Little musical talent but the encouragement of husbands who wanted them to be great. (Although I personally believe Linda was dragged into the studio by Paul (at first) while Yoko pushed John to record her.)

When I was young I almost had a soft spot for a couple of Yoko songs. I remember watching Sweet Toronto, and watching Yoko sing Don't Worry Kyoko. Subtitled Mummy's only Looking for a Hand in the Snow, it's about her search to find her missing daughter. I remember the startled glances Eric Clapton kept sending her way as she tried to find the place in the song to come in. But I also recall where she looked worried, scared, and John comforted her. I 'got' the song and what she was doing. And for a time I thought I understood the pain she was going through.

No. I was mistaken. I recently watched it again and I can't find that special moment Yoko and I shared.

Was it just my imagination? My desire to try and love all things connected to The Beatles? Did I view a different edit? Or did that event occur in a different song and my memory has caused them to collide?

She grinned at the end of the song as though she'd accomplished a great feat, and I suspect she had no idea of how little the crowd enjoyed the song. Not many people believe she is truly musical, despite John's assertions that when he first heard The B-52s playing Rock Lobster he'd finally found musicians who had caught on to what Yoko was trying to do. Except she was doing it first, of course. I think that was simply John making musical connections where connections didn't exist in order to try and defend someone he loved.

For many years I've tried to understand the need for John and Paul to bring their wives along for the music-making ride. John needed the constant mothering and 'you're a genius' assurance from Yoko. She had him convinced she was an amazing and original artist and that music is simply another art-form in which she could create.

I suspect Paul, on the other hand, had a desire to keep up with the Lennons. You have Yoko, I have Linda. As well as the constant companionship of a seemingly domestic wife and the country homelife he'd always desired. But PaulAndLinda was never going to be the conjoining JohnAndYoko was.

Don't even get me started on the political New York stuff he poured out with Yoko in the early 70s.

Try it. See how much better John is when he's not punctuated by Yoko. Take only his tracks from Double Fantasy and Milk and Honey and combine them onto a single album. It works pretty well.
Posted by The Doc and the Guv at 05:00