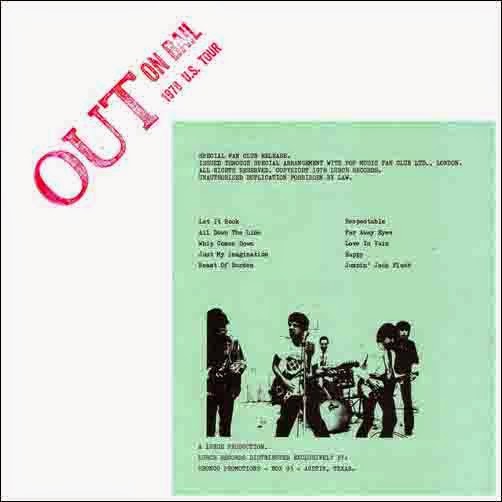 I was a teenager when I held my first foray into the world of bootlegs. An older friend played me a couple of his latest acquisitions, a pair of titles by The Rolling Stones. They were raw, rough, and fun to listen to. I loved the primitive artwork, and I suspect, I loved the knowledge they were illicit. I think I was secretly thrilled to be part of the underground, that none of my other friends knew these records existed. I felt older, more into music than them. Whatever the reasons, it was enough. I was hooked.

So it wasn't long before I went in search of bootlegs by my beloved Beatles.

In hindsight I'm sure they were around, but for a naive boy like me they weren't particularly visible. If I'd been a little older, a little more 'street-smart', I'd have probably found a stack in a tiny record shop in the suburbs where the counter-culture held sway. At the time, however, I only knew of one shop which sold them, the shop where my friend had scored his Stones albums. 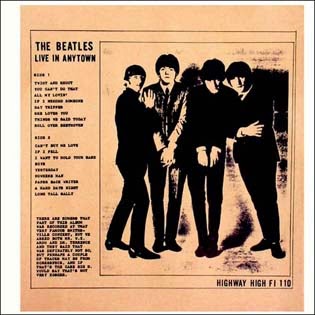 The guy behind the counter was friendly, even chatty, until I mentioned I was looking for a particular title. His manner changed instantly. He had never heard of that disc, never had them in the store, didn't know what I was talking about, and thanks for calling. I never even mentioned the 'B' word.

A short time later I stumbled across my first Beatles bootleg at a market. Live In Anytown was a bizarre mash of songs from several different shows across different years. Even the producers were vague about the source with this note in the credits. "There are rumers (sic) that part of this album was recorded at the very famous Smithsville concert, but we asked both Mr W. Z. Ardo and Dr. Terrence and they said that was definitely not so, but perhaps a couple of the tracks might be from Horsesneck and if that’s the case Big D. would say that’s not very kosher."

As an album I found it less than satisfying and never played it all that much. 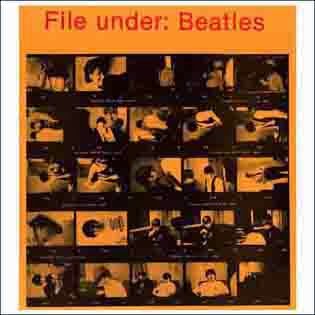 File Under: Beatles was my next vinyl bootleg. A mix of  Get Back outtakes, unreleased demos and tracks lifted from The Boardroom Tape, I enjoyed this one a lot more. Sure, it was patchy and some songs were incomplete, but the audio was pretty good. This was the first time I heard tracks like Come and Get It, Goodbye and Leave My Kitten Alone. For a short time I played this disc a lot. I mean, I had new Beatles songs.

But the love affair didn't last. It's an album I listened to from time to time, but for some reason I didn't find it anywhere near as satisfying as those early Stones bootlegs I had. I'm afraid they still got more playtime, even though I only had cassette tape copies.  I figured vinyl bootleg was a medium that suited the jagged edges of the live Rolling Stones. Plus the covers on Stones bootlegs were funnier and had more interesting artwork than the Beatles covers. 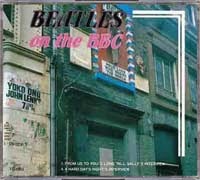 Skip forward to the late 80s and circumstances had brought me to Japan to live for a few years. One day while out walking, I wandered into a discount store. Surrounded by piles of cheap, brightly colored plastic crap-o-ware, and  jammed into a rack of budget label discs of oldies and crooners and such, I discovered Beatles On The BBC. I played that thing to death. It was a two disc package, well presented, good selections and great sound quality. Finally I had a Beatles bootleg I could listen to repeatedly. And it still stands up, even against the more recent official Apple products.

Ah Shinjuku. Bootleg central of Tokyo. And for the years I lived in Japan, Tokyo was bootleg central of the world. Shop after shop crammed with titles you could only imagine. We were spoiled for choice in those days. But shortly before I discovered this district, I experienced a defining moment in my life. 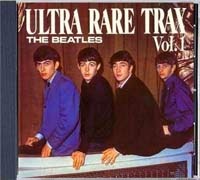 I have vivid memories of the store, which ironically wasn't a bootleg specialist. The discs were reasonably cheap and I was concerned I was being ripped off. I needn't have worried. The moment I got them home and hit the play button I was completely blown away. Beatles outtakes in studio quality. Very different versions of songs I was oh so familiar with. The first take of I'm Looking Through You, stripped back and stunning in its simplicity. Take 2 of Can't Buy Me Love with the backing vocals. Even hearing That Means A Lot and How Do You Do It? in good quality.

I was in heaven.

And these are discs I still listen to from time to time. They're certainly more listenable than the official Anthology albums. They hold up well over more recent bootlegs. And I guess I recall them like my first love, a warm nostalgic memory of the halcyon spring afternoon when I first heard them. 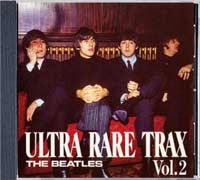 It didn't take me long before I possessed all six volumes of Ultra Rare Trax issued by The Swingin' Pig. (I even owned the extra two volumes tacked on by another label) They varied in quality, had some highlights, but never were as amazing as these first two discs.

I remember being amazed at the idea that someone had somehow nicked these tapes from the studio. These days I know more about the source of this material, although there still seems to be some dispute as to whether it was through John Barrett or Roger Scott. A lot more material has emerged from these tapes. And with more recent releases like Rockband extractions and OOPS remixes which give us an insight into the recording process, we have lots of great stuff out there. So much. Too much, in fact. I feel overloaded at times, and I think we can get a bit blase about what we have access to.

Recently I played all these discs, just to see what it was that kindled my passion for Beatles bootlegs. And boom, I was there again. A teenage boy in his bedroom listening to Mick Jagger snarl his way through a 1978 setlist.

The flame took. And as I progressed through my other discs, it flared. I fell in love with The Beatles yet again.
Posted by The Doc and the Guv at 05:00