I recently discovered Love Me Do: The Beatles' Progress by Michael Braun. Written during 1963 and 1964 while on tour with the band, his book is surprisingly daring and honest for the time. Braun describes the boys drinking, smoking, swearing and talking about women - everything a good Beatle didn't do.

At the time it seemed as though the press had a moratorium on publishing accounts of their behaviour on tour. I've read tales of journalists being extremely aware of the band's indiscretions (and sometimes involved) but opting not to write about them. And although Braun doesn't go into too many specifics, he gives a fascinating insight on what they were really like.

Hunter Davies' biography from only a few years later was authorised, and as such was heavily sanitised. John Lennon recognised this, and in an interview with Jann Wenner in the early 70s pretty much described the book as being a work of fiction. Braun's book, on the other hand, rips the curtain open and portrays the boys as real humans, real personalities who are more than their caricatured personas.

"That was a true book," Lennon said. "He wrote about how we were, which was bastards … You have to be a bastard to make it, man. That's a fact, and the Beatles were the biggest bastards on earth." 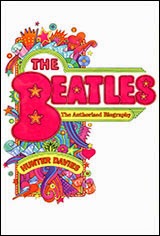 While there's little doubt The Beatles behaved exactly like suddenly rich young men with incredible fame (and dare I suggest, while shouldering the burden of  being the coolest four guys on the planet), there's little evidence they were as ruthless as Lennon seems to think. The above quote was said at a time when Lennon loved savaging the Beatles myth. He took delight in tearing down their reputation. But more than that, he was an unreliable witness. He was prone to hyperbole, or even making up stories. He longed to be the rebel to Epstein's image-creating guidance, the non-conformist while everyone else remembers him willingly going along with their plans for musical world domination. His assertions the boys smoked dope at Buckingham Palace have been pretty much refuted by everyone. He described the 1964 Australian tour as Satyricon. And while I've no doubt they had veracious appetites, none of it would have compared with Led Zeppelin or Vanilla Fudge in the 70s.

But Lennon was on the right track. Braun's book certainly goes further than the others. Music papers generally ignored the existence of this book. The 1995 reprint with a foreword by Mark Lewisohn was the first time many fans even became aware of it. Me? I accidentally stumbled across the 1964 edition only a few months ago. I'm embarrassed I'd never sought it out before.

A Hard Day's Night was a loving, photoshop of a day in the life of a Beatle. On the other hand, Love Me Do: The Beatles' Progress is a raw, grainy polaroid of the same moment in time.
Posted by The Doc and the Guv at 05:00