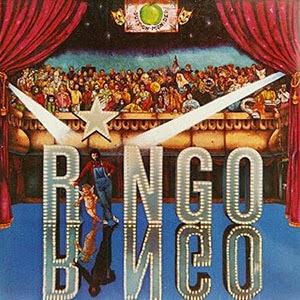 After The Beatles broke up in 1970, fans were desperate for any sign of reconciliation. They would grasp any rumour or gossip that the four had re-united. Of course this led to a number of bizarre situations, such as the tongue-in-cheek reunion offer on Saturday Night Live, and the instant fame of Klaatu.

The SNL offer came closer to a reunion between Paul and John than anyone at the time could have possibly realised. Stories vary as to whether they only joked about accepting, or made it all the way down to the street but couldn't find a cab. We can only speculate at whether they may have continued on the reunion path had they actually made it down to the SNL studio. Klaatu, on the other hand, were a trio of Canadian musicians who remained anonymous as they wanted their music to speak for itself. A journalist noted the musical similarities to The Beatles, which rapidly evolved into a rumour they actually were The Beatles in disguise. The record label chose not to deny it, which then ruined the band's future career as the public presumed it was a deliberate hoax. While they certainly wear their influence on their sleeve, one listen to that first album should have been a clear indication it wasn't the fabs. Sad. It's a great album that's largely ignored and forgotten. 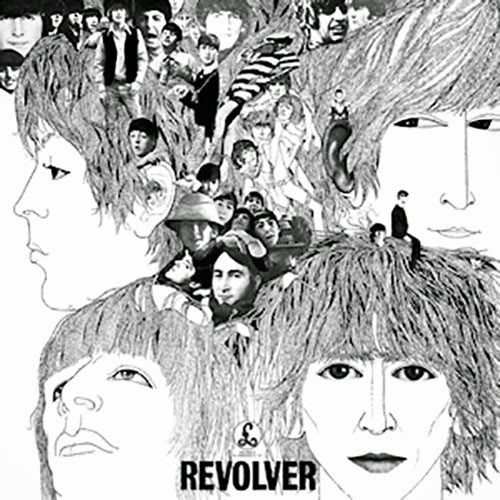 But in 1973 reports circulated The Beatles had reunited, without Paul, to record tracks for Ringo's solo album. Klaus Voorman had played bass for Manfred Mann and had been suggested as a replacement for Paul three years earlier. He'd known the boys since Hamburg, dated Astrid Kirchherr and lived with George and Ringo for a period of time. Later he'd won a Grammy for  designing the cover of Revolver. Add Billy Preston on keyboards and fans had reason to believe it was just like old times.

Richard Perry, the producer, reportedly could not believe his luck. Here he was producing The Beatles. "Just like that; no planning. The three ex-Beatles recorded one of John's songs. Everyone in the room was just gleaming. It's such a universal gleam with The Beatles."

It was not quite a reunion, simply one session that ran for eighteen minutes. Ten takes of I Am The Greatest, which suggests most takes must have been incomplete and the whole process was rushed. It was a song Lennon had penned, supposedly intended for Ringo, and it sounds like it could have opened a Beatles album. Harrison and McCartney played on other tracks on this album as well, though notably not together. Both contributed songs, while Harrison co-wrote one with Ringo. 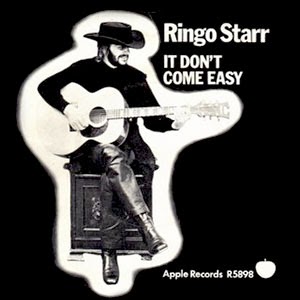 Even Ringo has sole writing credits on a couple of songs, although I wonder how much help he received. The film Let It Be makes it quite clear Harrison played a major part in the writing of Octopus's Garden. And the other songs he wrote around this time, such as Going to Carolina, display little in the way of sophistication. It Don't Come Easy, a single not on the album and credited solely to Ringo, is a good song. And certainly more complicated than anything else he'd done thus far. The demo version, complete with guide vocals by George and 'Hare Krishna' backing vocals, suggests Ringo wasn't the main author.

And so we had the most Beatlish of the post Beatles albums. Billy Shears gets a mention. All four wrote songs and played on it. Beatles alumni, such as Klaus Voorman, Nicky Hopkins and Billy Preston, all made contributions. Heck, even Mal Evans finally got a co-writing credit. 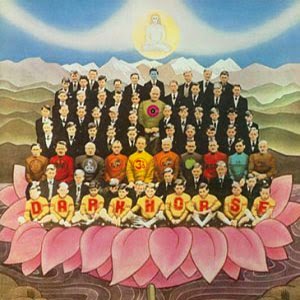 And then there's the cover art. A not too subtle nod to Sgt.Pepper. George certainly liked the idea as he revisited the concept on Dark Horse.

Forty years later and it's still the most Beatles sounding of any of their solo albums. It holds up reasonably well, although there's only so much of Ringo's singing voice I can take. If Ringo had sung only one track, George had sung two, and Paul and John had taken three each, we'd have a reasonably good Beatles album.

Alas we only have what we have. I find Ringo as an album more satisfying than their other output from 1973. Mind Games was uneven, Living In The Material World was too Krishna, and Band on The Run, while a close second to the Ringo album, is simply too twee in parts.

If only they'd put aside their differences and used their powers for good.