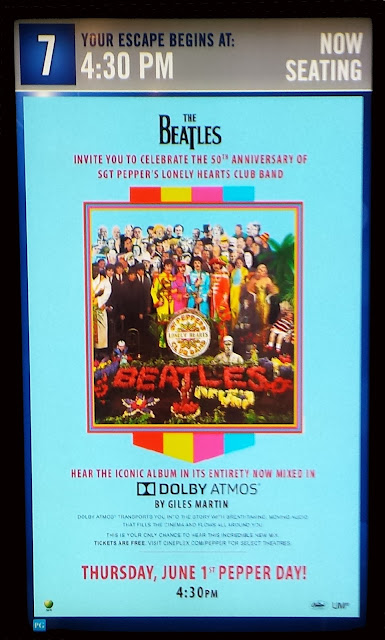 About 100 hardcore Beatle freaks left work early yesterday to attend a one-time listening party of the "immersive" Sgt. Pepper mix in downtown Toronto at 4:30 pm. From L.A. to New York, select cities across North America hosted the free event to celebrate the 50th anniversary of the landmark album.

First of all, what is an "immersive" mix? Imagine surround sound, like 5.1 in your home or a public cinema, but with extra speakers on the ceiling so that the listener is almost entirely surrounded by sound (except the floor). Add more subwoofers to boost the bass. (Currently, there are no plans to offer the Pepper immersive mix to home theatre.) As he did with the new stereo and 5.1 remixes, producer Giles Martin prepared this Dolby Atmos mix. So, how was it?

Let me note that I've listened to the amazing new stereo remix many times (review here), but not the 5.1 yet. For yesterday's listening, I sat near the center of the cinema, in the sweet spot, slightly right of center. The verdict: This immersive mix was impressive, but didn't blow me away.

Immersive mixes allow sounds to swirl literally over your head, behind you and around the sides and front, essentially 360 degrees. Sure, there was some of that, notably in Mr. Kite and Within You, Without You, but was it was missing in tracks you'd expect like Lucy In The Sky With Diamonds and A Day in the Life. The immersive mix was conservative and didn't exploit the medium's potential.

On the positive side, Ringo's drums and Paul's bass drive the immersive mix, just like in the stereo. It was powerful and visceral. Also, there is even more definition in the instruments than in the stereo remix. There were harp passages in She's Leaving Home I'd never heard before. The Western-and-Indian instrumental break in Within You, Without You is breathtaking. Same goes with the musical wash in Mr. Kite. Surprisingly, Lovely Rita benefits the most from the immersive treatment, with its layers of instruments spread across the sound field to dazzling effect. The final piano crash of the album in A Day in the Life was so powerful it literally rattled the ceiling of cinema 7 of the Dundas-Yonge Cineplex, a cinema designed to withstand Hollywood blockbusters.

Yes, it was an enjoyable listening experience and I'm glad I attended it, but it wasn't a leap from my stereo mix blasting from my 5.1 home theatre system. Also, it would have been nice to hear Strawberry Fields Forever and Penny Lane included in the immersive presentation.

Reaction from the mostly 100 Baby Boomers in the audience (some of whom remember spinning their mono vinyl LPs of Pepper in the summer of love) were mostly thumbs up. "Amazing," said one. "Really liked it," said another. Another fan was impressed, but wanted to rush home and compare it to the original mono mix. (Before the immersive mix played, there was a brief video of Giles comparing a snippet of Pepper in mono, the new stereo and the immersive. The differences were subtle.) A veteran American music producer felt the mix was off-balance, but that may have had to do with where he was sitting in the cinema. Another fan wanted more high-end definition.

Me, I can't complain. I love the new Pepper and hearing it with extra channels was a splendid time, especially surrounded by fellow Beatles freaks.
Posted by The Doc and the Guv at 03:15