Review: The new remix is the definitive Sgt. Pepper 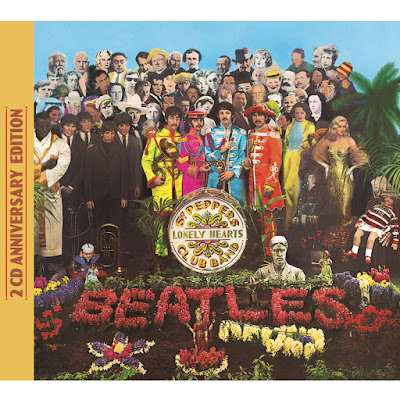 Fifty years, almost to the day, The Beatles have properly mixed Sgt. Pepper's Lonely Hearts Club Band in stereo. Producer Giles Martin and engineer Sam Okell have reconstructed the album by sourcing the original tracks to present vocals and guitars that sparkle and bass and drums that roar.

Martin has centered the vocals, forever erasing the ugly extreme panning which segregated vocals to one channel and almost all instruments to the other. On every track he has added new details from guitars, keyboards, tablas, strings and backing vocals that ring out of speakers and headphones alike. Layers of sound that The Beatles and his father George with engineer Geoff Emerick first constructed in the winter of 1966/67 burst across the stereo picture in songs such as Getting Better.

Pepper was never my favourite Beatles album. (Revolver is.) In fact, Pepper was down my list. I listened to the 1967 stereo all these years and lamented how the album just lacked something. Too whimsical in places, not enough weight. Sounded flat. However, this 2017 remix makes me reassess Pepper. I now see its depth and appreciate its complexity. Its sheer force is now undeniable--and exciting.


Overall, Martin and Okell have injected the overall album with power and dimension. Long buried in the original 1967 stereo mix, Ringo's drums propel virtually every song, balancing the whimsy in tracks, such as Being For the Benefit of Mr. Kite, and adding menace to others, including Good Morning, Good Morning.

Oh God, you may be thinking, another bloody Beatles reissue. Not at all. This release is not a re-master, but a brand new mix. It ain't a paint job and scrub, but an entire re-design by shifting vocals and re-organizing sounds to realize the effect that The Beatles originally intended in spring 1967. The band oversaw three weeks of mono mixing, but weren't ever around for the stereo mix that lasted three days. Mono outsold stereo in 1967. The audience lagged behind the imagination and ambition of The Beatles. In turn, their Pepper would propel stereo's dominance, usher the rise of the long-playing record and spark the transition of "pop" to "rock."

Giles' stereo mix takes its cue from the mono mix which was the mix that The Beatles intended the world to hear. Mono packs a sonic punch, forceful and aggressive, compared to the thin 1967 stereo. Here's a review of each track, plus the single that was originally planned for the album, Strawberry Fields Forever/Penny Lane:

Sgt. Pepper's Lonely Hearts Club Band
Opens with snare drum on the left channel, a much louder bass that rumbles in the center and a guitar that now snarls on the right. The guitar offers far more detail than before and sounds like Jimi Hendrix. The guitar continues to slash as Paul screams the vocal in the centre to create an exciting dialogue. Backing vocals are spread across both channels in exquisite detail. An amazing opening.
Verdict: Excellent

With A Little Help From My Friends
Vocals are centered, and the overall track has a mono feel except that Paul's melodic bass dominates the right channel. This is one of the simpler tracks of the album, so there are no sonic fireworks, but all the elements roll along in the right place.
Verdict: Good

Lucy In The Sky With Diamonds
The opening keyboard riff dances across the left and right channels to mesmerizing effect that runs through the entire track. It's a subtle, but brilliant touch as if enticing the listener to run down the rabbit hole with vocalist Lennon. John's vocal is centered, anchoring the song. Drums, tamboura are center-left, while Paul's bass is center-right in a delicate balance. This is one of the few tracks where Ringo's drums aren't pushed to the forefront, and I understand why. That would have smothered the sound collage that Lucy creates.
Verdict: Good

Getting Better
The fireworks return with this track. Paul's bass is right upfront and gives the song a whallop that was missing before. Again, vocals are centered. New to my ears were the guitars chiming in both channels and the piano plucking in the right. Ringo's high hat sparkles in the left. The remix shows off the layers of sound like never before which hum together like a mighty machine.
Verdict: Stunning

Fixing A Hole
The opening keyboard has never sounded so detailed. Ringo's drums are predominantly left, guitar mostly right (except the solo) and Paul's vocal at center to anchor the sound picture. Backing vocals also mostly right, but the panning is balanced, not lopsided or distracting.
Verdict: Good

She's Leaving Home
The first thing you notice is how fast this track is, nearly as fast as the mono (which never sounded right to me). This mix demands some adjustment, because I'm used to hearing the slower 1967 stereo version. But in direct comparison, the slower version sounds melodramatic. Also, Giles has separated the individual stringed instruments across the channels giving them room to breathe while allowing Paul's vocal to dominate in the center. Faster, less emphasis on the strings, less melodramatic. Also, John's key background vocals are more distinct and detailed. Overall, a well-balanced track. This faster version gives the song more urgency and bite.
Verdict: Surprising at first, but overall good

Being For The Benefit of Mr. Kite
This was one of the worst-mixed songs on the 1967 stereo, your typical hard-pan with the vocals 2000 miles away from the instruments. I hated it. Centering the vocals is a huge step forward here. Secondly, the individual instruments are separated across left and right, and each rings clearly. The difference is immediate and amazing. Third, Ringo's drumming adds weight to a song that was whimsical, even slight, before. And fourth, the wash of sound at the end is downright dazzling. Another WOW moment.
Verdict: Stunning

Within You Without You
Every instrument, stringed and Indian, sparkles on this track. They are spread across both channels instead of lumped together into a dull mess as before. George's vocal in the center literally bridges both sets of instruments. Most astonishing is the extended musical break starting at 2;23 where Giles exploits the soundscape to contrast and blend the Indian and Western instruments. Hands down, this is one of the most breathtaking moments of this remix.
Verdict: Stunning

When I'm 64
Brushes-on-snare on the left, clarinets on the right and Paul's vocal in the middle. Simple and it works.
Verdict: Good

Good Morning Good Morning
Crank this one. This new remix is a monster rock track. Ringo drives a tank throughout this song, adding a layer of menace which injects John's lyrics about a dull day with paranoia and chaos. And I mean that as a compliment. Another WOW moment. This remix is light years from any you've ever heard.
Verdict: Stunning

Sgt. Pepper's Lonely Hearts Club Band (reprise)
Given the bass-and-drums boost of every track before, it's a slight letdown to hear this mix. On the 1967 mix, this track rocked the hardest, but no longer. Is this a bad mix? Not at all, but it doesn't surprise like the others. Paul's vocal, though, is crisper, and you can hear him scat in the fade out just like he does on the mono mix.
Verdict: Okay

A Day In The Life
Mixed feelings. John's vocal is centered throughout and--for once--I miss the extreme panning. In the 1967 mix, his vocal starts in the extreme right than gradually shifts to the center and eventually hard-left, counter-clockwise. I miss this sense of disorientation and movement. That said, every sonic element on this track rings clearer with more detail, notably John's unearthly Ahhhh at 2:46. And the final piano chord is a knock-out punch.
Verdict: Mixed feelings

Strawberry Fields Forever
Actually remixed in 2015, but the structure is the same as the other tracks: centered vocals and individual instruments and effects delicately mixed on the left and right channels. The svarmandal still deliciously sweeps across the soundscape. Again, the instruments offer detail and immediacy.
Verdict: Good

Penny Lane
It's subtle, but this is one of the most radical remixes. It's not a hard rock song, but a collection of vignettes that Paul imagines of his hometown, Liverpool. Storyteller Paul is front and centre. Flourishes appear discreetly on the left and right channels, like the piccolo trumpet solo on the right, or the fireman's bell on the left. Again, subtle. My only complaint is that the trumpet near the end of the song is slightly buried in the left channel. (If anyone's asking, on my iPod I've placed SFF/Penny between Within You Without You and When I'm 64 and chucked Lovely Rita altogether.)
Verdict: Good

OVERALL: Though imperfect, the 2017 stereo remix is the new definitive mix of Sgt. Pepper. It comes closest in capturing the Beatles' intentions and in conveying the complex soundscapes created in 1967 when the band was limited by four-track technology. All vocals, instruments and sound effects burst with fresh detail. Centering the vocals is a leap forward and boosting the drums and bass restores the visceral power of this rock album that used to be found only in the mono mix. My only real misgiving is the vocal placement in A Day In The Life, but the remixes of the title track, Getting Better, Mr. Kite, Within You and Good Morning are breathtaking. This remix firmly places this album in the 21st century and (partially) restores Pepper's reputation which has been overshadowed in recent years by Revolver.