50 years later: Is love all you need? 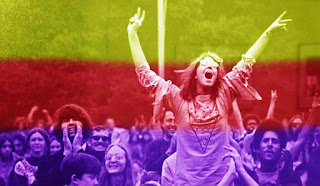 1967, the Summer of Love: LSD, pot, psychedelic music, hippies, be-ins and free love. It was the visible crest of an underground movement that had been building for some time. Posters for a Love Pageant Rally in October 1966 called for participants to “Bring the color gold... Bring photos of personal saints and gurus and heroes of the underground... Bring children... Flowers... Flutes... Drums... Feathers... Bands... Beads... Banners, flags, incense, chimes, gongs, cymbals, symbols, costumes, joy." By January the first Be-In was held in Haight-Ashbury in San Francisco, the apparent epicentre of hippiedom. On 13th May, 1967, Scott MacKenzie released his huge hit San Francisco (Be Sure to Wear Flowers in Your Hair). Selling some seven million copies, he set the tone for the coming summer. And then on 1st June, the Beatles unleashed Sgt. Pepper on an unsuspecting world.


We loved it. We were stunned by the aural experiment. We were yet to hear of Pepperland--that was to come in 1968's movie, Yellow Submarine, but Sgt Pepper took us there, albeit through a haze of cannabis. The Beatles, meanwhile, had continued recording songs in the key of Pepper. Baby You're a Rich Man, Hello Goodbye, Magical Mystery Tour and, of course, All You Need Is Love, which was to become the anthem of the summer.

But looking back from the 21st century, is it as meaningful and as relevant as it seemed then? Let's look its history.

The lads had been asked to contribute a positive song to Our World, the world's first satellite link-up show. It was broadcast 50 years ago today, June 25, 1967, live around the globe with an estimated audience of 400 million. Paul had apparently offered Your Mother Should Know, while some suggest he also delivered Hello, Goodbye. Did John write All You Need Is Love specially for the broadcast? George Martin and Ringo seem to think he did, while Paul maintains the song was already kicking around. It matters not, for John’s contribution, which further explored the themes of The Word from Rubber Soul, was chosen. With a simple, repetitive chorus encapsulating the mood of the counter-culture, it was the perfect sing-a-long hit for an international broadcast, a message and vocabulary that would cross borders and languages.

All You Need Is Love was released two weeks after the broadcast and went to number one around the world. Rolling Stone magazine places it at 370 in its 500 Greatest Songs of All Time and at 21 in its list of 100 Greatest Beatles Songs.  While I agree it's a fine song, I can't help feeling Rolling Stone is being overly-generous.

Lyrically it's naive. The message is pure and true, but it's hardly a manifesto. It's a slogan, and the first of John's slogan songs like Give Peace a Chance and Power to the People. It's also the first of his political songs, superficial and passive compared to his call to action in Revolution a year later. When John offered the song to the Beatles, it's reported George Martin said to Paul, "Well, it's certainly repetitive." Subtle, George. 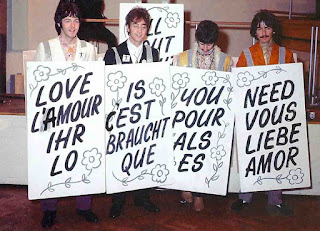 For a fun song about love, it's actually limiting rather than empowering. Even the opening lines "There's nothing you can do that can't be done/nothing you can sing that can't be sung" can be read as an instruction to know your place and not push boundaries. And then we get into the quasi-hippie gobbledygook. "Nothing you can do but you can learn how to be you in time," which sounds dangerously close to the modern "finding yourself" self-help mantra. There's also a touch of fate and predestination thrown in with "nowhere you can be that isn't where you're meant to be."  Deep ideas or shallow gibberish? A series of meaningless mantras thrown together because they sound philosophical? Read the lyrics and try to make sense of them.

Paul certainly didn't think so. In Many Years From Now, he says, "The chorus 'All you need is love' is simple, but the verse is quite complex. In fact, I never really understood it."

Of course Paul, the movement you need is on your shoulder.

Don't get me wrong. It's a great song. It captures the hope of the sixties. You don't need to understand it all. Just sit back and let the vibe wash over you, a bit like watching a David Lynch film but with flowers, bright colours and acid. It is a good message, and one we still need to learn. John, of course, never lived up to it. He pretty much abandoned Julian, treated Cynthia badly, and despite being with Yoko, continued his affairs. The glow of pot darkened as he delved into heroin, and within two years he was singing about his pain in Cold Turkey. I have no doubt John truly believed in his message of love, but couldn't effect it. All this only goes to show he was not the demi-god the world thought he was, but rather a human, imperfect and broken. It was all a dream and according to John, by the seventies, the dream is over. In his final interview in 1980, John said, "Maybe in the sixties we were naive and like children, and later everyone went back to their rooms and said, "We didn't get a wonderful world of flowers and peace." … Crying for it wasn't enough. The thing the sixties did was show us the possibility and the responsibility we all had."


Although well received at the time, the broadcast is dull and dated. While Canada showed a rancher with a herd of cattle and Australia included a segment on trams leaving their depot, London broadcast the Beatles live from Abbey Road studios. It was filmed in black-and-white, but following the previous segments it seemed as bright and shiny as if it had been in colour. The Beatles' segment alone has ensured Our World has remained in the public consciousness for fifty years. 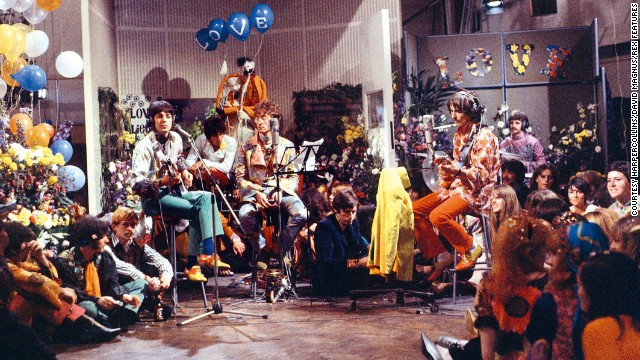 In psychedelic garb and surrounded by flowers, John, Paul, George and Ringo sat on thrones with their subjects at their feet, including Eric Clapton, the Rolling Stones and Keith Moon. John was nervous and chewed gum throughout. George Martin and Geoff Emerick were stressed, fearing a technical hitch, and when the broadcast commenced 40 seconds earlier than expected, they had to scramble to hide their scotch.

Peering through the rose-tinted glasses of time, it's easy to be nostalgic about 1967--the music, the fashion, the love, those halcyon summer days--but it wasn't as rosy as we remember. The Vietnam War was at its height, there were as many bad trips as good, not every hit was groovy, and San Francisco was unprepared and unwilling to assist the tens of thousands of invading dropouts and runaways. George visited Haight-Ashbury with Derek Taylor in August 1967, expecting it "to be special, a creative and artistic place, filled with beautiful people, but it was horrible - full of ghastly drop-outs, bums and spotty youths, all out of their brains."


During the sixties, many credited the Beatles with leading the cultural revolution. In hindsight it’s easier to recognise that although they were highly visible in the vanguard, they weren’t the leaders as such. They were right there, though, in the thick of popular culture and they quickly picked up on new trends, themes, ideas and movements which they extended and popularised, ignoring boundaries as they went. And it was indeed a movement, but we know that not everyone was feeling the love. As early as December 1966, Buffalo Springfield had released For What it's Worth in response to curfew riots on Sunset Strip. In 1968 the Beatles and the Stones recorded songs on a similar theme. There was a brief moment of resurgent hope as Woodstock provided a second, false dawn but that too died a few months later as the Stones played Under My Thumb at Altamont. Personally, the Beatles had trouble with loving each other. While recording the White Album they weren't getting along. Ringo quit, the sessions were strained and by 1969 the four could barely stand being in the same room together. To quote singer Larry Norman, "The Beatles said, All you need is love and then they broke up." 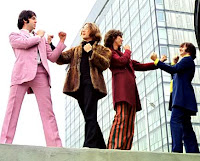 We remember the dream, the hope, the bright colours of the Summer of Love, and we are better for having it in our collective memories. And all we still need is love, but as John suggested, love is not just lying around in Haight-Ashbury waiting to be harvested. We have to take responsibility and put it into action.

So where does this leave us with the lyrics?

The Grant Study, which tracked Harvard undergraduates over 80 years in order to determine which factors brought happiness, has summarised its findings as "Happiness is love."

It seems it really is all you need.
Posted by The Doc and the Guv at 22:33