How well did Brian Epstein manage The Beatles? 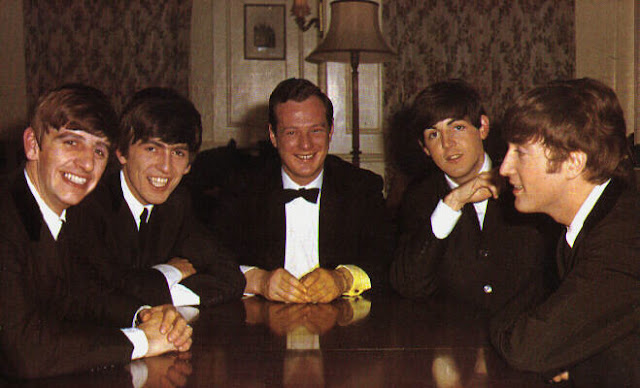 Seest thou the man who is diligent in his business shall stand before kings.

These words from the Hebrew Book of Proverbs were spoken at the memorial service of Brian Epstein who died 50 years ago from an accidental overdose of sleeping pills. Scores of books have praised and/or castigated the Beatles' manager who has been called the Fifth Beatle (along with George Martin, Pete Best, Stuart Sutcliffe). "Eppy" has been praised for ushering the group to stardom, but also cursed for losing them millions in bad deals. Stripping away the legend and hype, we ask, how good a manager was Brian Epstein? We look at Epstein's performance in areas including marketing, negotiating, concerts, records, music publishing and, yes, merchandising.

Backgrounder: the music world in 1961
First, let's remember there was no rock industry when Epstein started managing The Beatles in November 1961. There wasn't even rock. Instead, clean-cut, candyass pop singers and MOR crooners, not bands, ruled the airwaves. Singles sold, not albums. Careers lasted 18 months. Apart from Elvis (and only to a degree), musicians didn't merchandise themselves in dolls, lunchboxes and wigs. No act sold out football stadiums. Pop stars made shallow, low-budget movies to cash in on their fleeting stardom. And singers did not write their own songs; they were expected to sing someone else's, chosen by their label, producer and/or manager. This was the music industry that furniture and record retailer Brian Epstein dove into in 1961 that he and his band would revolutionize. 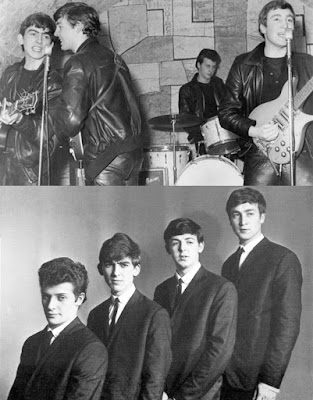 The Beatles were the first punks, swearing, eating and smoking onstage in leather jackets a full decade before the Ramones and Sex Pistols. But let's face it: In 1961 when Epstein signed the Beatles, no band--no matter how talented and especially from northern England--was going anywhere behaving and dressed like back-alley scruffs. Musicians wore suits and combed their hair. No exceptions. Epstein had no choice but to clean up the Beatles' presentation, and contrary to legend, Lennon, the most rebellious Beatle, went along with it. This repackaging worked. The suits made the Beatles presentable to all audiences around the world, most importantly middle America. It was also a canny move, because the Beatles ushered in the mid-60s Mod look with modern suits that boasted colour and expressive styles that still looks sharp today.
Grade: A 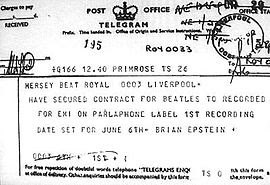 The Beatles ruled Merseyside clubs in 1961, but they couldn't break out nationally without a recording contract. Epstein knew that his role as manager depended on it and the pressure was heavy. Of anyone in Liverpool, Epstein had the best chance to score this prize because he ran the NEMS records department, the largest one in the area. Record labels already knew him and respected his power in selling their discs. That got Epstein into the door. Contrary to promoter Sam Leach (read Sam Leach was The Sixth Beatle? Bollocks on this blog), Epstein's chutzpah landed the eventual recording contract with EMI. The labels didn't roll out the red carpet and hand it to him. (For the full, complicated story, read Mark Lewisohn's exceptional Tune In.) Also credit Epstein for another crucial act: he re-awakened John and Paul as songwriters. It's a little-known fact, but until Epstein signed the Beatles, John and Paul had stopped writing originals. Epstein saw their path to enduring success through original songs. Without those songs, we would have never known the Beatles.
Grade: A

Music Publishing
In 1961, there was no rock industry and bands didn't write their own songs. In fact, bands didn't chart; solo artists did. Elvis was the King, but the King didn't write his own songs. The Beatles and Epstein entered unknown waters when they released Love Me Do and P.S. I Love You. They didn't understand how music publishing worked. Essentially, in the early-60s, a music publisher plugged a new single to TV shows, scored radio airplay, printed the sheet music and convinced other singers to record it. All this generated revenue that Dick James split 50/50 with Lennon and McCartney. This sounds unfair today. Why would a song-plugger receive 50% of the money, especially when Beatles' songs needed no promoting? Remember, this split was standard in that era, and music publishers had overheads like their offices to pay and truly worked to promote a song. Further, when Dick James plugged Please Please Me, the Beatles were unknowns and nobody foresaw Lennon and McCartney turning into a songwriting juggernaut. Certainly, after 1963, Dick James didn't need to plug the Beatles' songs and was coasting on the band's success. But you can't fault Epstein for signing this deal.

However, the scenario is far more controversial with Northern Songs, the Beatles' publishing company that was established in February 1963 after Please Please Me topped the charts. Dick James and his accountant owned 51% of the company shares while Paul held 20%, John 19% or 20% and Epstein 10%. The point is, John, Paul and Epstein held no more than 49%, which meant that James held the voting advantage at 51%. Income from record sales, live  and music publishing was split 50/50 between the two camps, though NEMS received only 10% of sheet music sales. James also received an administrative fee for running Northern Songs in the U.K. as well as abroad where John and Paul actually received a smaller cut of revenues after overseas companies took their cut. (For the full history of the Beatles' publishing, I recommend the excellent Northern Songs by Brian Southall with Rupert Perry.)
Back in the early-60s these were standard percentages but obviously exploited songwriters and enriched businessmen. This situation wouldn't change until the early-70s when rock matured into an industry. "John and I were taken for a ride," McCartney understandably complained to Mojo in 2005. "John and I didn't know you could own songs," Paul said in another interview. "We thought they just existed in the air."

Thankfully, Paul now owns his Beatles' songs due to a recent deal, but for most of his career and John's life, the songwriters were the poor men in their own publishing deal. Epstein didn't secure the best deal for his clients.
Grade: C 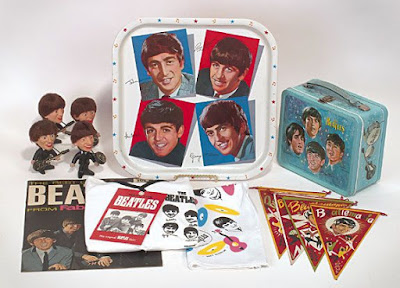 It's no secret that Epstein's greatest debacle was merchandising. Untold millions were lost, though attorneys on both sides of the Atlantic reaped thousands in the lawsuits that followed. We're talking 100,000 units of wallpaper and 100,000 toy guitars selling overnight in 1964. The Beatles' British, American and international success happened overnight, and the sharks circled to mass-produce almost any product that bore the name "Beatles." Understandably, Epstein could not assess all the merchandising requests that flooded his office or police the companies that were making Beatles merch and ripping them off. So Eppy was relieved when his solicitor, David Jacobs, offered to oversee merchandising. In America, the Beatles' merch operation was called Seltaeb ("Beatles" backwards). For reasons that Jacobs took to his grave, he signed away 90% of the American revenues to a mysterious figure named Nicky Byrne and three partners, leaving the Beatles with only 10% to split amongst them. That's right: 10%. For America, Byrne assigned lawyer Walter Hofer to administer American merchandising licenses which compounded this fiasco. Geoffrey Ellis, who served Hofer in late 1964, recalls licensing Beatles watches to a U.K. company but also fab four jewellery to a different company to be sold worldwide. Deals like this led to lawsuits. Ellis also recalls that Epstein took the appalling 90/10 deal personally and blamed himself for letting his boys down. By fall 1965, NEMS sued Seltaeb, launching a long, expensive two-year legal battle that infuriated the Beatles. True, Epstein wasn't the sole person at fault. Many were, including Jacobs and Byrne, but Epstein's failure to oversee merchandising was his greatest failure and it haunted him until his early death.
Grade: F

Negotiating
Brian Epstein was the most honest manager in show business in the mid-60s, which was his greatest strength and his greatest flaw. He operated on handshake deals, such as his agreement with Sid Bernstein to book Carnegie Hall in 1964 and Shea Stadium in 1965. He also didn't push Ed Sullivan for a higher fee, but demanded top billing for The Beatles for three straight shows even though they were (at the time of signing in late 1963) complete unknowns in the States. In other words, Epstein valued long-term exposure over short-term profit. Shrewd. However, there were moments when he undersold the Beatles. An example was A Hard Day's Night. United Artists producer, Walter Shenson, was prepared to relinquish up to 25% of the profits to the Beatles, but were stunned when Epstein's opening demand was a low 7.5%. On these occasions, Epstein was naive and meek, two deadly qualities in a cutthroat business.
Grade: C

Rapport with The Beatles 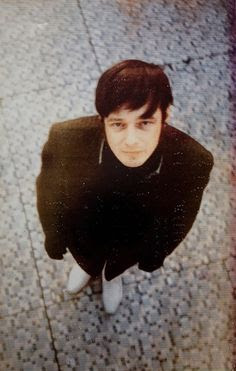 It's impossible to quantify the relationship between a musician and his manager. Managers are friends, business representatives, advocates, brothers, fathers and confessors to their clients. Sometimes they are true believers in their musicians. At worst, they are crooks (i.e. The Beatles, ahem, later management). Despite Epstein's shortcomings in business, he truly believed in the Beatles' talent and was a genuine fan. He identified their strengths: charisma, humour, performance and composing. Again, Epstein's encouragement of John and Paul to write original songs was crucial and, I argue, his greatest contribution to the band. At the height of Beatlemania, Epstein could have sold his stake and retired rich, but he remained loyal. Further, the Beatles were not easy masters to serve, not with the unpredictable John Lennon or demanding Paul McCartney.

Sadly, countless musicians were screwed by their managers: Elvis, Bob Dylan, the Stone Roses, New Order, the Rolling Stones and (after Epstein) the Beatles themselves. To his credit, Epstein let the Beatles do what they did best: make music. After selecting the song list for the failed Decca audition of 1962 (mostly showtunes and standards), he never interfered and he did his best to protect them from the sharks in the music business. He never robbed the Beatles. He treated them like artists with respect and even awe. He was never a Beatle, but he was part of their inner circle and essential to their existence. When he died 50 years ago, Lennon immediately (and secretly) knew, "We fuckin' had it," and history proves that the Beatles started slowly disintegrating: Magical Mystery Tour, Apple, Allen Klein, etc.
Grade: A

Overall
If the Beatles' story were to unfold again, then Brian Epstein would have hired a partner to manage the Beatles' business affairs to negotiate better music publishing, concert, record and especially merchandising deals. Likely, Apple would have never happened (that's an entirely different discussion). The Beatles, particularly John and Paul, would have been wealthier and the band probably would have lasted longer. Epstein was a master of packaging and presenting talent. I agree with Ray Coleman's assessment in his definite biography, Brian Epstein, that Eppy channeled his theatrical background and passion into launching the Beatles. I doubt that anyone else could have taken four scruffy rockers from the North and sold them to Middle America and the world. In short, Epstein was a flawed businessman--he could have done better for his boys--but he (and I Want To Hold Your Hand) was essential to breaking the Beatles worldwide. Brian Epstein was a mensch. No, he wasn't the Fifth Beatle (nobody was) and, no, he didn't "make" the Beatles as Ray Coleman insisted. The songs of John and Paul did. But without Brian Epstein, I doubt we would be speaking about the Beatles today.