Can It Be The Beatles? 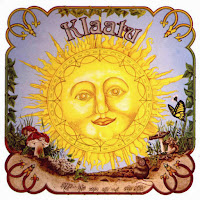 Klaatu were a Canadian band, a trio of musicians who recorded together in studio downtime. John Woloschuk, Dee Long and Terry Draper wore their influences obviously. And yes, The Beatles were one of their major influences. They released a couple of singles between 1973 and 1976 which didn't really do much. They also chose anonymity; not including their names, photos or details on these releases.

In 1976, they released their debut album, 3:47 E.S.T (simply retitled Klaatu in the U.S.) which received a number of positive reviews but didn't sell particularly well. All that changed when Steve Smith, a music journalist in Rhode Island, suggested the album was far too Beatlish not to have participation from some or all of the fab four, and so he announced it as a reunion. Sales in Rhode Island exploded and Capitol had to ship 20,000 extra copies to meet demand. 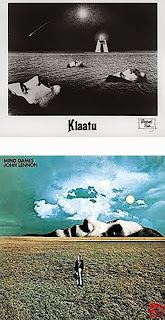 Capitol chose not to refute this, instead making cryptic and vague statements, probably figuring the bonus sales were a surprise benefit. The band, who were in London recording their second album, (which continued the Sci-Fi themes on some of their earlier tracks) heard about the rumours but did not regard them seriously. Nor did anyone in the U.K. Even the New Musical Express published an article in response to the theory, under the headline "Deaf Idiot Journalist Starts Beatle Rumour."

On the back of this unexpected popularity, Capitol released Calling Occupants of Interplanetary Craft as a single in 1977 and it did reasonably well. A cover version by The Carpenters performed even better. Things were looking good for the band.

But not all publicity is good publicity. A program director at a radio station did a quick search of copyright registrations and easily determined Klaatu had no Beatle involvement. This then turned into a backlash against the band as the public seemed convinced Klaatu were a deliberate hoax. Sales of subsequent albums slipped until Capitol dropped them from their roster after forcing them to record vocals for tracks recorded by session musicians.

Even now most believe the band was behind "the hoax". And there are some who are still convinced Klaatu is actually a Beatles reunion. Much like the "Paul is Dead" rumours, there are a number of 'clues' to be found in the music, the lyrics, the artwork and in real life. And a number of clues in Beatles music. There are far too many to mention here, and they can be found all over the internet. But here are some of the more obvious Beatles connections. 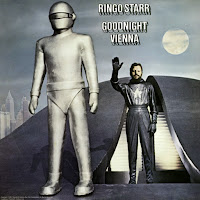 The cover for Ringo's Goodnight Vienna album has Ringo dressed as the character Klaatu in a scene from the 1951 film The Day the Earth Stood Still. In 1976 stories started circulating that McCartney had left the stage at one show with the farewell, "I will see you when the Earth stands still". He'd released the album Venus and Mars - a title with a sci-fi connection. Lennon, in the liner notes for Walls and Bridges, included the message "On the 23rd August 1974 at 9 o'clock I saw a U.F.O. - J.L." Out the Blue mentioned UFOs. Discarded artwork for the album cover included drawings of spaceships.

It's fun, but it's all a bit silly, really, simply proving that if you look hard enough for evidence you will end up manufacturing it.

In truth, 3:47 E.S.T. is an excellent, largely forgotten album. Their next two albums are also worthy of repeated plays. Hope is a full length orchestral space opera while Sir Army Suit has a number of strong tracks. Sir Bodsworth Rugglesby III, on the first album, sounds like the children's singalong that McCartney spends so much time trying to create. The vocals on Sub Rosa Subway and A Routine Day could be McCartney's. And Hope not only sounds like Harrison, but the lyrics are philosophical enough to be his. All in all these albums sound far more British than North American.


"I actually spent an hour or so chatting with Paul McCartney about Klaatu. He was asked by the host of a TV talk show about Klaatu and responded that he had never heard of the band. When he mentioned this to George Martin, George said "one of the chaps from the band works at Air Studios". I received a message from him the next day saying he was going to "do me", British for "beat the crap out of me". He showed up in studio 5 later and we had a great conversation about the whole story. Very nice!"

I don't believe McCartney had never heard of Klaatu for a moment.

McCartney was always the most media savvy of The Beatles. He was also the one who was most in touch with publicity and public perception. MPL, his production company, was a well oiled machine. If there were rumours of a Beatles reunion, his office would have kept him aware of them and delivered him the press clippings.

Klaatu Beatala Nikto.
Posted by The Doc and the Guv at 05:00