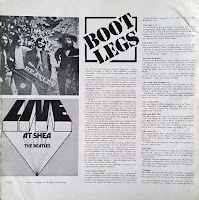 Although it would be another few years until I saw an actual bootleg for real, my first knowledge of their existence was in the excellent The Beatles: An Illustrated Record.

A double spread towards the back of the book gave me a tantalising taste of what was out there in the wider world. Song titles I'd never heard of before, exotic to a thirteen year old who only knew their hits. I Got A Woman, I Just Don't Understand, Please Don't Ever Change, A Shot of Rhythm and Blues, Have You Heard The Word?, Peace Of Mind, and even Johnny B. Goode. These were songs I could only try to imagine. I was as much a fan then as I am now. If it existed, or was even rumoured to exist, I wanted to hear it.

I'm pretty sure I'd never even heard of Chuck Berry at that stage, but for some reason I recall being aware that bootleggers often had to guess at the song title. And so I wondered whether Johnny B.Goode was actually a mislabelled Bad Boy. (The line, Now Junior, behave yourself, suggested the connection).  OK, I was reaching, but I was also thirteen at the time. 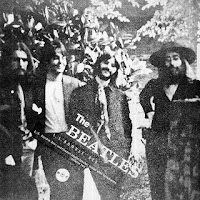 Now, of course, I have all these tracks. And many, many more. Some of them are mistitled, some of them aren't even The Beatles. Many people weren't aware exactly how much and how often The Beatles recorded for the BBC and so all the non-live tracks were presumed to be studio outtakes. And since this was before the major studio hemorrhaging that occurred in the mid 80s through John Barrett and Roger Scott, there are very few actual outtakes amongst these titles.

There are a few live shows here. Hollywood Bowl (for once not labelled as Whiskey Flats), Tokyo 1966, even a Shea film transfer, oddly labelled as 1964 rather than 1965. There's also a bunch of Let It Be outtakes, although these all seem to be audio transfers from the film and tracks lifted from the Glyn Johns Get Back acetate which had been broadcast on American radio before Apple issued cease and desist letters.

It's also kind of interesting to see my fourteen year old self scrawled 'Released' underneath Hollywood Bowl 1964, presumably just after the legitimate vinyl was released. Little did I know then that the record was actually a mix of shows from both 1964 and 1965.

Here are some excerpts from the page on bootlegs.


"The practice of bootlegging is immoral, illegal and - despite pressures brought to bear by the established recording companies - still very much a flourishing and lucrative business."

"Though one or two gems are to be found on bootlegs, the sound quality is invariably of exceedingly poor fidelity, excepting in those very rare instances have gained unauthorised access to the master tapes or acetates."

"Beatlegs are hard to come by and, if buying such product, it is more than probable that one won't be able to preview it before purchase. Therefore it's a question of 'yer pays yer money and yer takes yer chance.'Whatever the morality and the arguments for and against bootlegs' existence, the fact remains that, with little in the way of overheads and production costs to pay - and definitely nothing in the way of copyrights to be passed on to the artists and composers - the astute bootlegger stands to make anything up to 500 per cent profit on every album sold." 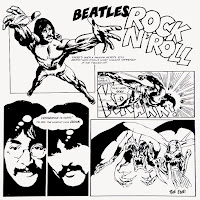 "As there are well over sixty Beatlegs in existence, the authors choose to offer a selection."

My, how times have changed. A whole sixty bootlegs? All sounding like rubbish?

It seems to me as though the authors weren't particularly well versed with the dark side of recording. While bootlegs may not have been so easily accessible in the UK, my understanding is they were much more readily available in the US. As for the huge profit margins supposedly made by bootleggers, from all I've read many made little or no money from them. Mostly they were fans, and shared the music for the love. In reality there was hardly anything here that was 'smuggled' out of studios - it was virtually all from radio or movie broadcasts. 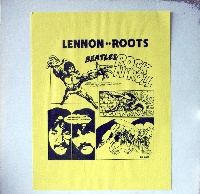 And really, images of Live at Shea and L.S. Bumblebee were the best the authors could manage? At least on the opposite page they had a stunning yet bizarre cartoon image of The Beatles Rock N' Roll, enigmatically labelled as 'Artwork for a record that was never made.' I always presumed this was early artwork for the official Rock 'N' Roll compilation, although now I suspect the authors meant for a bootleg record that was never made. Oddly, this artwork was later used for a John Lennon bootleg.

But thanks to the bootleggers, I've enjoyed more than the record company has given us. Apple has been notorious for not sharing what it has locked away in its vaults. Apple rarely asks the opinion of fans and generally ignores what we desire. If it wasn't for bootleggers I'd never have seen Let It Be, the Shea Concert, or most of their TV or promotional films.

God Bless you, bootleggers, wherever you are.
Posted by The Doc and the Guv at 05:00