Waiting For The Scruffs

Musicians have fans - that's nothing new.  Many of these fans are dedicated beyond belief, buying concert tickets across whole tours, taking unpaid vacations to go to every show, collecting expensive memorabilia. Fandom is a passion almost impossible to explain to someone who doesn't get it.

Even compared to the most rabid fans of other groups, the Apple Scruffs were special, and I doubt we'll ever see the likes of them again. These fans, mostly young women, spent years simply waiting outside the offices in Savile Row and the Abbey Road Studios. Many had given up their jobs. Others juggled waiting with work. They'd sleep on the concourse outside the studio in winter, often until early morning, waiting and watching, waiting for a sighting, waiting for a few words from one of the four. They had a network so well organised that The Beatles were always stunned to find Scruffs already waiting at places like Trident Studios when they arrived. 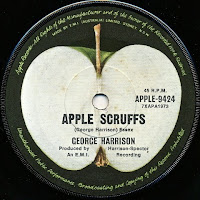 George even wrote and recorded a song about them on his All Things Must Pass album. (As a side note, when I was in High School, a friend submitted the lyrics to this song to our English teacher for a poetry assignment. Even then I was impressed he was smart enough to choose a more obscure song with which to cheat. For the record, George Harrison received a B.)

It took me a long time to locate a copy of Waiting For The Beatles at a reasonable price. Long out of print, this book by Carol Bedford tells her version of what it was like to be an Apple Scruff. Bedford was an American, a long time Beatle fan who moved to the UK in order to visit The Beatles. She was successful, visiting most of them at their homes, making friends with other fans, and so ended up staying. Like the other Scruffs she was on first name basis with the fabs, and was even invited into the inner sanctum a few times.

I looked forward to this book, to reading an account of what it was like to have the kind of dedication it took to be a Scruff.

This book isn't as insightful as I would have liked.

Bedford comes across as a self-centred petulant pre-teen, although she was several years older than that. A young woman who arrives in the UK, befriends some of the other fans, (they weren't called Scruffs until much later), then anoints George as her chosen one, apparently for no other reason than there were fewer girls chasing him. George, in fact, is portrayed as being privileged to have her as his fan. She has a nemesis, another George fan, who is up to all kinds of dirty tricks to thwart her efforts. This whole sub-plot reads like a high school romance novel. 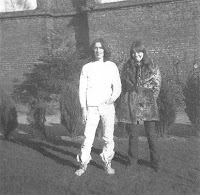 George is seen as a caricature, a cardboard cutout who is chastised and berated by Bedford when he doesn't pay her enough attention. And then when George apparently makes a series of advances towards her, she rebuffs him, acting coy and shocked, declaring the past years of flirting were all innocent.

Incidents seem to be embellished to give the author a starring role. I'm almost surprised she didn't include herself present at the business meeting where Lennon declared himself to be the reincarnation of Jesus. She was there when John went to Cavendish Avenue and threw the brick through McCartney's window. She was watching through the window when Paul announced he was quitting the band. And she was the one who, reluctantly and at the spurring of others, climbed through the bathroom window to take Paul's possessions. Of course once inside Paul's house, she wouldn't touch anything. No, that was the other girls.

Interestingly, other Scruffs insist she wasn't even there at the time.

I read somewhere George was angry about the book. Other Scruffs question the author's motives and narrative honesty. But I didn't need those opinions to form my own. This book needs to be taken with huge shovels of salt.

Even at the end, when Bedford decides to stop following George around, she declares that it's her gift to him, relieving him of the responsibility of their friendship. She writes a letter explaining all this, then within a week contacts him when she's heard he's had an accident. 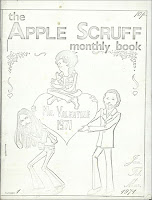 Apparently Bedford passed away a few years ago after a long illness. Still in London and, I suspect, still dreaming of George.


Despite all this, I enjoyed this book. Yes, read between the lines. Separate the fact from fantasy. There's enough at its core to give some insight into this kind of fandom.

It's the only Apple Scruff's book I've managed to find thus far. I've read that at least one other Scruff has thought about writing her story. And I'd love to see a bound collection of all their newsletters reproduced.

In the meantime, I'm grateful for this one. I'm just waiting for another Scruff to write a better one.
Posted by The Doc and the Guv at 05:00