Cover Art Down Under

Australia generally replicated The Beatles' UK album releases during the 60s, although there were a couple of oddities along the way. Two albums in particular had quite different covers from the UK canon. 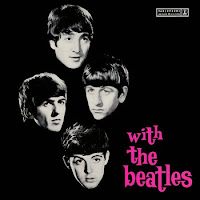 With The Beatles, the second album, had uniquely Australian artwork. Printer union rules would not permit negatives to be imported for printing purposes, although the negative from a photograph of an original sleeve could be used. Attempts to replicate the qualities of the UK sleeve failed, and so original artwork needed to be created. And it certainly was original; four heads floating on a black background, with a bright pink, curling font. I've read that Lennon in particular hated the cover and made it known at the time he toured Australia. This is the sleeve I grew up with, and the only With The Beatles I owned until the 1987 CD release. 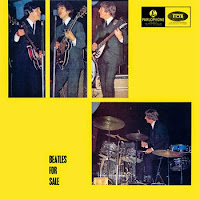 Beatles For Sale also had a very different sleeve to the UK version. The Australian release had individual photos of the four lads at their Sydney concert set on a bright yellow background, apparently with little artistic thought. In fact Ringo's photo only showed the back of his head. A generally amateurish effort all round. I suspect this alternate imagery may have been due to the same union rules as per With The Beatles. The grainy quality of the UK version may not have photographed well enough, or perhaps after the local record executives felt some local content following the 1964 Australian tour would boost sales. Either way this is far less attractive than the Australian release of With The Beatles which, at least, holds an early 60s charm. But as a teenage I remember being stunned by the beautiful image on the UK version when I first saw a photo of it. 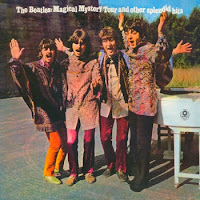 Magical Mystery Tour was not released as an album in the UK or Australia, instead being issued only in EP format. It was Capitol Records in the US who had the common sense to combine these tracks into a single album. Here in Australia the World Record Club made this disc available to its members through mail order catalogues under the title Magical Mystery Tour and Other Splendid Hits.  And, just to be different, they used an alternate sleeve design, a shot taken from within the booklet of the UK EP. My friend's dad owned this, and taped a copy for me in the mid 70s. But within a year or so I had actually joined the record club just to buy this album, as it was not until 1979 that EMI Australia produced a local version. Even then it was only with the CD release in 1987 that this record became commonly available here.

During the sixties, EMI Australia compiled and released two greatest hits albums, Greatest Hits Volume 1 and Volume 2. The artwork for both these records borrowed heavily from the US albums Beatles VI and Beatles '65. By the time these albums were released in 1966 and 1967, The Beatles on the cover art in no way resembled The Beatles who had already released Revolver and Sgt. Pepper respectively.

Considering these two albums were released so late in the decade, it's strange they included nothing past 1965. Nothing from Revolver, no single only tracks like Rain. Surprisingly they even included a few album tracks like Anna and Til There Was You that weren't hits, or even B-sides of singles.

These collections sold very well, and remained in print until the CD releases in 1987 were well established. As an interesting aside, the UK release A Collection of Beatles Oldies, which probably would have made these issues superfluous to anyone who had all their albums anyway, wasn't released in Australia until 1968, two years after its UK release.

Both were released in mono and stereo, and included some tracks which appeared in stereo for the first time anywhere in the world. 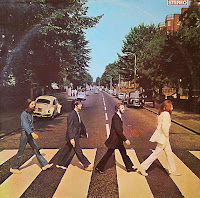 There's one other Australian cover variant that requires mentioning. A minor misprint that would barely be noticed by most, it played an important part in late 60s pop-culture. The first Australian edition of Abbey Road had a printing problem, resulting in an odd reddish hue. If you look carefully between Ringo and John, there appears to be a large red bloodstain on the road surface. Corrected in time for the second pressing, this misprint played into the hands of the whole "Paul is dead" theory which was just gaining traction around the time of this album's release.

Post 1970 there were a couple of local releases, such as The Essential Beatles, but apart from a few minor variations, Australian versions aligned with the UK canon.

For further details on Australian releases, may I recommend I Am the Platypus, a great website and resource, and the excellent book, An Overview of Australian Beatles Records.