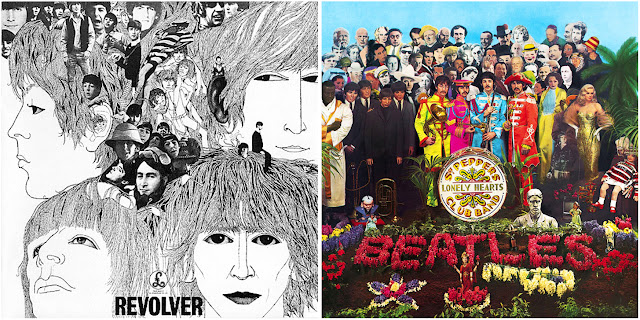 For years, Sgt. Pepper's Lonely Hearts Club Band was considered rock's greatest album. In the U.S., Rolling Stone magazine has long ranked it at #1 while Pepper sits in the prestigious Library of Congress' National Recording Registry for posterity. Critics on both sides of the Atlantic first in 1978 then 1987 awarded Pepper the top spot.


Probably the tide turned when the 1987 CD issue of the UK version of Revolver finally reached American fans. Since the album's stateside release 50 years on August 8, 1966, American listeners were stuck with an inferior version that omitted I'm Only Sleeping, And Your Bird Can Sing and Dr. Robert. Since 1987, generations have grown up on the complete 14-track album which restores the absence of John's missing songs and rectifies the balance of Revolver.

Further, those GenX'ers and Millennials didn't live through the Summer of Love, which Pepper shaped. Instead, the younger generations grew up with a critical distance and simply listened to the music.

That said, Pepper remains the favourite of many rock and Beatles' fans, but so does Revolver. Below, we (the Doc exhalting Revolver and the Guv championing Sgt. Pepper) debate the merits and weaknesses of both albums.

Doc: Sgt. Pepper had the greatest impact of any Beatles -- or rock -- album, but in terms of songwriting, performance, innovation and vision, Revolver is superior. Revolver captures Lennon, McCartney, Harrison and Starr hitting their creative peaks at precisely the same time. They were abetted by an experienced, yet adventurous producer in George Martin, and a hungry, innovative engineer in Geoff Emerick.


Guv: Revolver is the latter part of the Beatles' transition to studio band, but it's still not fully realised. It's patchy. The studio band is still finding its wings. Pepper, on the other hand, stands as a whole. I clearly remember the first time I heard the album as a teen. It blew my mind. As an album, it was greater than its parts and evokes an atmosphere -- a place, a time, a psychedelic, swinging 60s Liverpool.

Doc: Pepper is an achievement of the highest order, too, but it's an excursion into fantasy and whimsy and not terribly personal or profound, except for A Day In The Life.


Guv: Pepper as an album is more complete, more realized. It's a painting, a watercolour. Revolver is a collage that is best viewed in segments.

Doc: The songs on Pepper are as varied in style and subject matter as those on Revolver, but because the former is packaged as "Sgt. Pepper's band" there's an illusion of unity. It's a collection of songs, that's all, and those songs simply aren't as memorable as Revolver's.


Guv: It wasn't really a concept album, but that's what it is. And it's not just the packaging. The flow of the album is a listening experience. I can dip in and out of Revolver. Pepper is an album I listen to in total.


Doc: The overall flavour of Pepper is self-conscious fantasy, a la Mr. Kite and Lucy and the title track itself. Mind you, the fantasy is dazzling...

Guv: While I agree it's very much fantastical, I don't for a moment believe it's self conscious. Lucy and Kite both have brilliant and creative origins: a child's drawing and an Elizabethan poster - both ideal candidates for songs, and neither is self-conscious. And the instrumentation on those two tracks is highly inventive. Original, stunningly beautiful soundscapes to listen to.

Doc: I find the lyrics on Revolver are more personal and therefore resonant. Pepper is fun, but Revolver touches me.

Guv: Exactly! Pepper is fun. It's not wildly introspective, which is what acid [LSD] did for them, but full of humour and wit. The backing vocal lines in With A Little Help From My Friends. The humour of Lovely Rita ("What do you see when you turn out the lights? I can't tell you, but I know it's mine", "took her home, I nearly made it," & "sitting on a sofa with a sister or two") Nudge-Nudge, wink-wink.

Doc: That's my point: Pepper is indeed fun, more fun that Revolver, but Revolver is grittier. The songwriters began writing introspectively with Rubber Soul, then went full bloom with Revolver, but the acid-Carnaby Street scene pushed John and Paul into whimsy and fantasy.

Guv: Oh, come on! Once again you're picking on Rita and Friends? Just how introspective and reflective do you find Yellow Submarine? And Taxman is just George complaining about how much he had to pay the government. As far as protest songs go, it's hardly Dylan! And what's wrong with Whimsy and Fantasy?

Doc: Nothing, but Pepper is 90% whimsy and fantasy. It needed a personal, poetic song like Strawberry Fields Forever to balance it out.

Guv: Again I come back to listening experience. Put on Pepper and I'm transported. A fantastical world. I can close my eyes and be lost for 43 minutes.

Doc: One area where Revolver triumphs over Pepper is the diversity of voices. Revolver boasts three George songs and the rest are split between Paul and John. Pepper is overwhelming Paul. You barely hear George. John shines with Lucy and A Day In The Life, but his presence is weaker than usual. I love the contrast of voices on Revolver and miss that interplay on Pepper.

Guv: George shone on Revolver, no doubt. But an album is not about democracy. It's about the best songs at the time. It was a mistake to leave SFF and Penny Lane off Pepper, for sure. I know Paul can be twee (i.e. the verses of Getting Better) but John was there to balance that with, "It can't get much worse." Paul countered this by softening Lennon's seriousness, for example, with his interlude in the middle of A Day In The Life.

Doc: Look at side 1 of Revolver: George's Taxman (an angry song with a funky bassline and a blistering guitar solo), the sad eloquence of Eleanor Rigby with a restrained, but effective classical backing, taking Yesterday a step further), then dipping into psychedelia with John's dreamy ode to daydreaming in I'm Only Sleeping with the backwards guitar. Then, we turn 180-degrees into India with Love You To, which rocks as hard as any Beatles song, only it's done with a tabla and not a Rickenbacker.

Guv: But it's disjointed. It doesn't flow as well. And this is where tone comes in. Revolver works well enough, but as I suggested, by accident.

Doc: My point about Revolver isn't about democracy, but diversity. You have three voices -- and personalities and world viewpoints -- contrasting each other. In Pepper, those viewpoints are glossed over by fantastical songwriting and elaborate musical arrangements. What may be a jumble of songs to you, is to me like reading an anthology of the greatest short stories of all time from cover to cover.

Guv: Even an anthology of short stories needs a unified theme and flow.

Doc: Revolver flows. The unity lies in the consistent level of musical invention and economical writing of every song. There's no fat on this album and each song is reaching for a new sound and expression. For example, the long, "elliptical" fade-in of I Want To Tell You is seductive and smart.

Guv: Of course there is fat on Revolver. Yellow Submarine belongs there? It's a throwaway, charming kiddie song. Love You To is good, but hardly vital.

Doc: The lyrics in Revolver are more personal and the songwriting is economical. Lyrics get to the point and they are sharper. Take any line out of Eleanor Rigby, which is one of Paul's finest lyrics ever ("and was buried along with her name"); or the sardonic Taxman ("If you take a walk, I'll tax your feet"); or the sadly nostalgic She Said She Said ("When I was a boy, everything was right'); or the enigmatic Tomorrow Never Knows ("Lay down all thought surrender to the void").

Guv: Those are fine examples, but you can counter those lines with a bunch from Pepper. "And the time will come when you see we're all one and life flows on within you and without you".
Doc: Pepper has its moments, lyrically, but they are fewer and far between. "I used to be angry young man, me hiding me head in the sand" in Getting Better is honest and powerful. "See the people standing there who disagree and never win and wonder why they don't get in my door" is a rare instance of Paul talking to himself (a la John). Then, of course, you have A Day In The Life.

Guv: I won't deny Revolver pushed envelopes both instrumentally and in arrangement. It was a huge leap from Beatlemania's boy-meets-girl. But Pepper took it a step further and the studio became another instrument like never before. I would argue that has never been surpassed. Elaborate, textured, layered, but not self-conscious.

Doc: On Revolver, some songs just didn't need elaborate arrangements, like Here There and Everywhere, She Said She Said and Good Day Sunshine. They could have been performed in concert. Pepper songs were all intended for a full production. I can't imagine Lucy in acoustic.

Guv: Revolver was a band still in transition, from teenyboppers to studio masters. Their minds and imaginations were opened by acid, and they needed to replicate that experience on vinyl. They had time to experiment in the studio, and were fortunate to have willing accomplices in Martin and Emerick. And they did it so well. Revolver is, indeed a masterpiece. But by the time they got to Pepper they had more control, more time (they'd stopped touring) and were able to practise and develop their parts. Paul's playing is more melodic than every before. Revolver took them to the final camp, but with Pepper they reach the top of the mountain.

Doc: The fantasy of Pepper is imaginative and beautiful, but there is a shallowness to it as well. Revolver's songs are more personal and direct, so they touch the listener. Also, there is a diversity of voices on Revolver that is lacking on Pepper. (The Beatles could have rectified this by including Strawberry Fields Forever.)

Doc: Revolver is a collection of sounds, many new to listeners in 1966, yet still fresh 50 years later.
There's Indian raga, Memphis soul, Beach Boys harmonies, a children's song, an acid trip and classical strings on an album that has no weak moments.

Read more of our special coverage celebrating the 50th anniversary release of Revolver:

Cos I'm The Staxman: What if the Beatles recorded Revolver in Memphis?

As relevant as the Vietnam War: the Beatles' butcher cover 50 years later 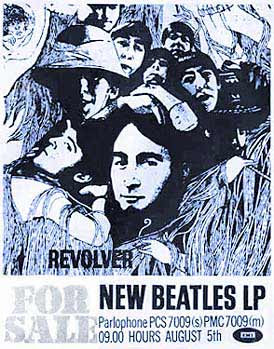