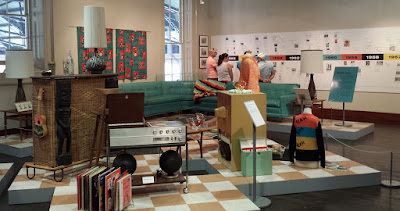 When The Beatles Rocked Toronto is long on Toronto history, but short on the Beatles.
Promoted as "Metropolitan life and music in the mid-60s," the exhibition (running through Nov.12 at the St. Lawrence Market's Market Gallery and part of a larger celebration, Beatles 50 T.O.) does just that. A detailed written timeline, vintage living room furniture, Yorkville coffee house posters, a giant map of the downtown music scene and archival photos detail the vibrant mid-60s scene in Toronto.

This part of the exhibition succeeds. It illustrates uptight, WASPy Toronto invaded by white kids playing folk music and rock 'n' roll. There are mementos of folkies including Joni Mitchell, Gordon Lightfoot and Neil Young who graced the coffee houses of Yorkville, then a hotbed of teen rebellion (and today a millionaire's playground). 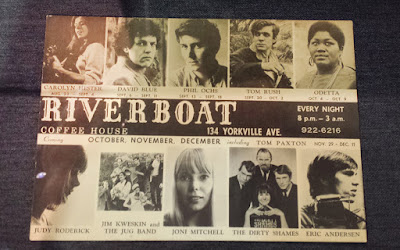 A glaring omission is Bob Dylan.

In September 1965, Dylan recruited Ronnie Hawkins' (a legendary Toronto rockabilly singer) band, The Hawks, to back him on his tour. Dylan was transitioning from a folkie into a rock star, and the Hawks (later The Band) would join him. The marriage of Dylan's lyrics with electricity revolutionized popular music in 1965 that directly influenced The Beatles. And Toronto played a key role. So, where's Bob? 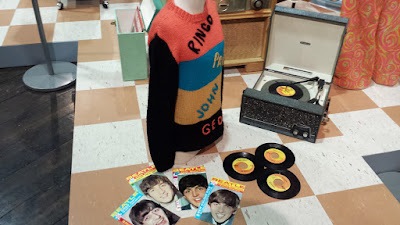 This half (literally more than half the floor space of this art gallery) of the exhibition does not connect with The Beatles. True. It's important to offer context so that audiences today can understand the impact The Fab Four had on North American cities like Toronto. However, the Yorkville scene consisted of coffee houses where folk singers played. How did The Beatles fit? The exhibition feels like two separate shows: one about mid-60s Toronto music, and the other about The Beatles' three Toronto concerts in 1964, 1965 and 1966. 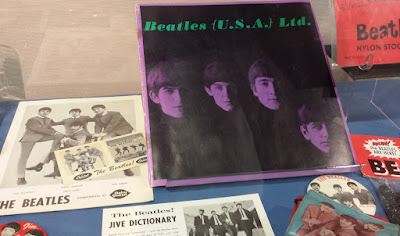 Visitors, of course, will pay more attention to the The Beatles' part of the exhibition. There is the requisite memorabilia: a tour program, bobbleheads, trading cards, an oversized comb, a Beatles wig, and a Toronto Telegram magazine picturing John in a ridiculous nightgown on the cover. The jewel is a pristine "butcher" cover. All fun and fine. 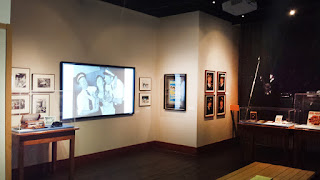 More intriguing are Canadian items that few fans have seen: ticket stubs from the Toronto shows, a Cadbury Chocolate offer to buy Beatles photos, CHUM radio station record charts, a rare concert poster, and a Canadian fan club membership card and newsletter. Capitol Canada head honcho, Paul White, contributes much of his own vinyl, including a company newsletter, dated Nov. 22, 1963, declaring "BEATLEMANIA" INVADES CANADA that outlines his record release schedule and strategy. (The exhibit proudly notes that the Beatles conquered Canada a year before the U.S.)

White shares some reminisces in a video that is part of a larger loop. No, there's no footage of The Beatles here, certainly not the concerts or interviews with screaming fans. Instead, there is a Toronto music program that ran on TV. Shamefully, most of this video is marred by out-of-synch audio.

That's right. There's not a single second of film or audio of any of The Beatles' concerts, press conferences or even news coverage (i.e. CBC-TV). Collectors have this already and some of it is available on the internet, but something - anything - deserves to be part of this exhibition. This is inexcusable.

The closest we get to reliving the concerts are two slideshows capturing fans clamouring outside Maple Leaf Gardens, Toronto's venerable, old hockey arena where The Beatles performed, and of the band itself performing onstage and hosting press conferences. Photographers Boris Spremo, John Rowlands and Lynn Ball share many amazing images. Fans scrawl graffiti on the Gardens' back door, and weep and scream in and outside the venue. Watching this, I wondered, What happened to these teenage fans? Where are their reminisces in this exhibit?

Another glaring omission is the complete absence of Revolver. Though the band played no music from this album, the entire point behind the August 1966 tour was to promote it. Similarly, there's zero reference of The Beatles getting fed up with touring and soon winding down Beatlemania. There's no explicit mention of the Bigger Than Christ furor, Tokyo demonstrations and Manila fiasco that forever drove the Beatles, which in turn makes the 1966 Toronto concert all the more important. 1966 forced Sgt. Pepper.  Yet, none of this context is here.

The visitor gets close, but not close enough. When The Beatles Rocked Toronto is a nostalgia trip for Boomers who lived through the era, but they will gain no deeper understanding of The Beatles. Casual fans and those born after the 60s will enter a time capsule and get a taste of Beatlemania and Toronto music, but will not understand the significance of The Beatles on Canadian society. They were a big pop group, that's all.

At $10 admission and supported by the Toronto and Ontario governments, When The Beatles Rocked Toronto is a cash grab.