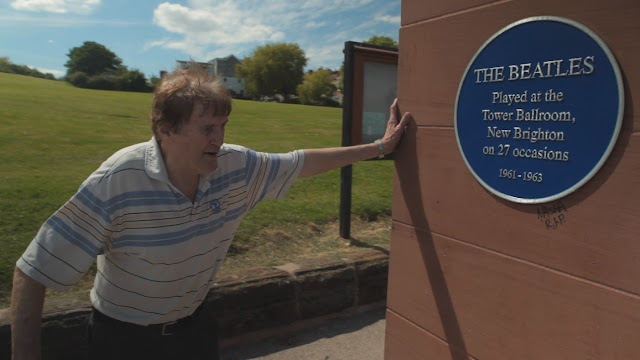 For decades, fans have affectionately regarded Brian Epstein as the fifth Beatle. As their manager, Epstein cleaned up the Beatles' punk image, dressed them in matching suits, secured them a record contract and booked their fateful American appearance on the Ed Sullivan Show of February 1964, launching Beatlemania.

Nobody denies Epstein's accomplishments, not even Sam Leach. But Leach, a promoter who booked some of the Beatles' early Liverpool gigs, now claims in a documentary that just premiered at the Toronto International Film Festival that Epstein stole the band from him.

It's telling that a preamble before the film states that Mark Lewisohn, a widely respected Beatles' historian, had wanted his interview removed from the film, because he felt the film was "erroneous." I can see why, but I am glad that the TIFF screenings included Lewisohn, because he grounds the film in reality. (Freda Kelly is another reliable interview subject who does a good job explaining the early-1960s Liverpool rock scene and The Beatles' place in it.)

In contrast, Leach, along with musical contemporaries of the early Beatles, and American journalist Larry Kane (who covered the Beatles' U.S. tours of 1964-66, and hardly an early Beatles specialist), back up the ludicrous claim that Epstein stole The Beatles from Leach.

There's an old saying: You're entitled to your opinion, but not the facts. Well, the facts don't support Leach. Yes, Sam Leach promoted some of The Beatles' early shows, some of them big and important in their career. He deserves credit, and his name graces some renown biographies, including Lewisohn's exhaustive Tune In, but Leach isn't the only one who helped The Beatles.

Allan Williams, who truly was the Beatles' manager before Epstein, booking them to play all-nighters in Hamburg which forged these scruffy Scousers into a tough, exciting band. All fans agree that Hamburg was the pivotal moment in The Beatles' early development.

Beatle fans will approach this film with skepticism and few will be swayed. I walked away from The Sixth Beatle appalled that Epstein was cast as the villain and Leach as his victim. Not only Leach, but Pete Best.

What? Yes, the movie claims that Epstein kicked Pete out of the band so that he could get Pete's mother, Mona, off his back. Mona ran the Casbah Club, where she let the young Beatles play when they were just kids. Yes, Mona also aided The Beatles' development and deserves credit, but to charge Epstein for conspiring against her is laughable.

Further, The Sixth Beatle states that The Beatles were ready for stardom before rich, posh Epstein swept them away. Untrue.The film fails to say that Epstein was rejected by every London record label, including EMI, and how his own family disapproved of his detour into music management. Remember: Epstein managed the record section of his family's department store. He was not a showbiz big shot as the film alleges.

Crucially, the film fails to say that Epstein encouraged John and Paul to resume songwriting from their pre-Hamburg days. Without those early hits to propel them to national then worldwide stardom, The Beatles would've remained a Liverpool legend--and nothing more.

In the film, Leach actually comes off as an amiable fellow reminiscing about the good ole days, but he also sounds envious, even bitter. Leach couldn't launch The Beatles, so he's attacking the guy who did. That's sad. Further, these attacks are so far-fetched that they discredit Leach. It'll only get worse if filmmakers Anthony Guma and John Rose cut Lewisohn from the final edit.

Even with Lewisohn, The Sixth Beatle is a dishonest film, but one that I fear casual fans will take at face value.
Posted by The Doc and the Guv at 09:56