Nobody wanted to play bass in The Beatles. John, Paul and George wanted to play lead or rhythm guitar. Bass wasn't sexy. You couldn't "pull the birds" plucking a bass. So, in the early days in Hamburg, Stuart Sutcliffe (below with George) was stuck with the instrument after his bandmates urged the gifted painter to spend his winnings from an art competition to purchase a Hofner 333. 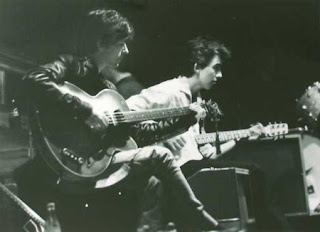 After all, somebody needed to provide the band with a bottom end as they rocked the stages of the Kaiserkeller and the Top 10. After Stuart left The Beatles in July 1961, he passed his Hofner to a reluctant Paul who eventually bought his own bass. 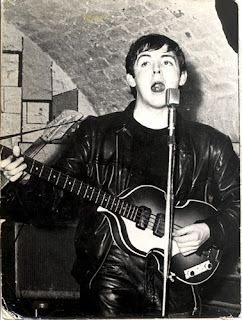 Today, we identify Paul with his violin-shaped Hofner and adore his exceptional playing on so many songs. (But let's not forget George subbing for Paul in a few exceptions, such as She Said, She Said.) Here, in our humble opinion, are the ten finest bass lines in The Beatles' canon:

Click each song title to hear the isolated bass track of that song. 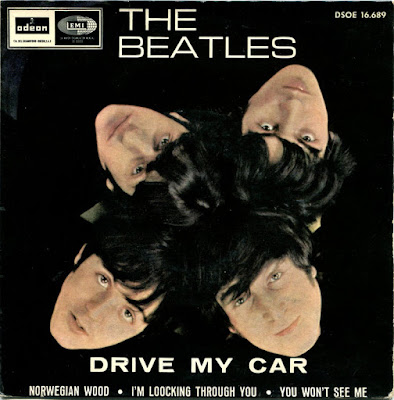 Though John and Paul wrote the lead-off song to Rubber Soul, George suggested that the band play the lead and bass guitars almost in unison, directly influenced by Donald "Duck" Dunn's stellar bass performance on Respect by Otis Redding which was charting in mid-1965. After the lead guitar opens the song, George lays down an unmistakably funky bass line that lets the other instruments and Paul's vocal fall into a solid groove.

Taxman
And Your Bird Can Sing
Paperback Writer
Rain 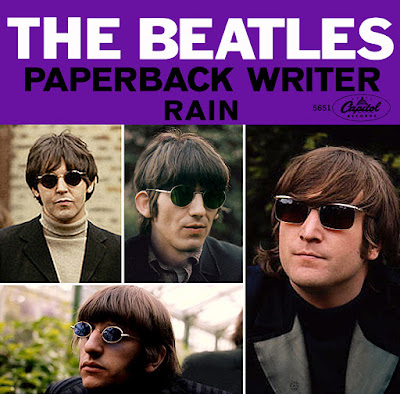 Revolver showcases Paul's bass like no other album before or after. There are four reasons why the bass sound is so rich on The Beatles' seventh album: Motown's influence (its legendary session bassist James Jamerson), Stax Records (Donald "Duck" Dunn), Paul's new Rickenbacker 4001S bass, and Geoff Emerick. Emerick became The Beatles' recording engineer at Abbey Road, the guy in the white lab coat who placed the mics around the instruments and twiddled the knobs on the recording console. "I was getting frustrated listening to American records like the Motown stuff," recalls Emerick, "because the bass was a lot stronger than we were putting on our records." Emerick remedied this deficiency by basically turning a studio speaker into a giant microphone to capture Paul's monster bass lines (the technicals are detailed in Emerick's memoirs, Here, There and Everywhere). Listen to the mono version of Revolver and the Paperback Writer/Rain single. The songs rival James Brown in sheer heaviness in the bottom end. Paul deserves full credit for the infectious bass line that grips Taxman. It's perhaps the most recognizable bass line in the Beatles' catalogue and was good enough for Beck to copy in The New Pollution 30 years later. Paul's bass dominates Paperback Writer and Rain so thoroughly that the needle nearly jumps off the grooves of the vinyl on your turntable. Both the released and alternate versions (right channel of take 2) of And Your Bird Can Sing showcase Paul's melodic bass lines.

Getting Better
It's hard choosing one song off Sgt. Pepper that demonstrates Paul's bass-playing prowess. The recording process on this album was a little different, in that Paul laid down his bass part last, after the rest of the instruments and vocals were recorded. This perspective afforded him the opportunity to shape his basslines which were invariably melodic yet meaty. Lovely Rita and A Day In The Life also feature outstanding work by Paul. 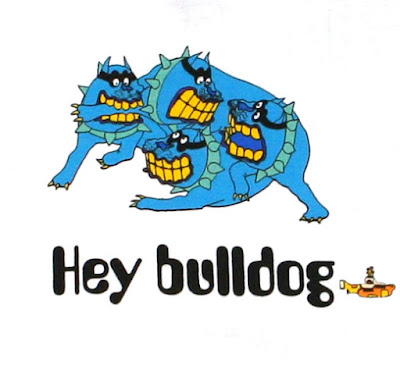 The track that benefits the most from the 1999 remixes of The Yellow Submarine Songbook CD is Hey Bulldog. The old extremely panned stereo mix spreads the rhythm section paper thin, but the bold new remix concentrates the drums and bass, propelling those intruments to the front of the stereo picture. Ringo's drums and Paul's bass leap out the speakers like never before. Paul's fills between John's verses are full of swagger and attitude.

Come Together
Credit Paul for taking John's original up-tempo Chuck Berry rocker, slowing it down considerably and adding a swampy bass lick. Like Rubber Soul, Abbey Road opens on the bass and carries the song all the way through. In the long fade out, Paul's fluttery notes over Billy Preston's organ solo is outstanding. 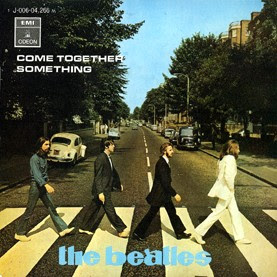 Something
This bassline divides listeners: it's either too busy, threatening to distract from George's vocal, or it sweeps you in a melodic tour-de-force. I'm of the latter, and love the interplay during the guitar solo between George's guitar and Paul's bass.