Photograph is the unofficial sequel to Postcards from the Boys, 2004's disappointing collection of postcards Ringo sent to friends, fellow Beatles included, over the years. Both books were published in lavish, signed limited editions by England's Genesis Publications, which specializes in issuing expensive, signed limited editions. The posh Photograph came out two years ago with a print run of 2,500. For those who can't afford to mortgage their home, Photograph has just been released as a $70 (in Canada) large mass-produced coffee-table book.

The results this time are far more satisfying. Photograph is Ringo sharing his photo album with his fans, showing snapshots of his life from him as a baby to today. It's charming and personal, and the closest we'll ever get to an autobiography from Mr. Starkey. 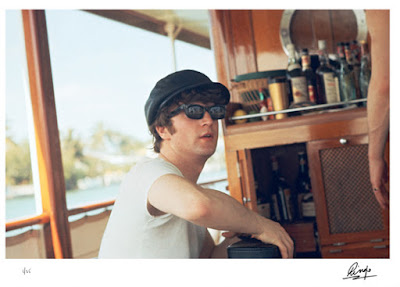 The Beatles, of course, appear in most photos, though they don't appear until p.82 of this 302-page tome. That's good. The first section allows the reader to get to know Ringo, illustrating his difficult childhood against the backdrop of grim, postwar Liverpool, and establishing who he is before he became famous.

Ringo is a happy lad in those shots but his brief captions relate a rough upbringing. “Admiral Grove was uglier than it looks in this photo,” he describes the stark rowhouses he called home with his beloved mum, Elsie, and his stepfather, Harry. There are as many pictures of hospitals and nurses as there are of classmates, given how Ringo was hospitalized for long periods as a boy. A few photos show him playing hookey from the hospital by spending his birthday in London with an uncle.

Suddenly, Ringo enters his teenage years and plays drums. We see several pictures of him in clubs in various bands, but Rory Storm and the Hurricanes dominate. His captions tell us that Rory was Merseyside's top band before The Beatles rose. Ringo poses with as many girls as drums, and he comes off as a carefree lad, like any teenage boy playing in a rock band. And boy does he look young.

In these pages, Ringo is the most candid he's ever been in print or in front of a camera, but only in short captions that accompany his pictures and, frankly, he doesn't offer details or wild stories in these pages. (This is Ringo, after all, not John or George.) Ringo keeps it simple and to the point, much like his drumming. Why did he leave Rory Storm and join The Beatles? “I just loved the band,” he answers, “that's why I moved.” 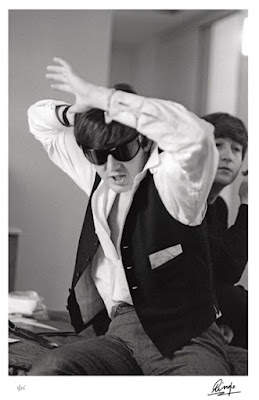 The Beatles photos are private shots, capturing him and his bandmates, for example, sequestered in the Georges V Hotel in Paris in January 1964. There's Paul mugging in a beret and George washing his hands in an ornate bathroom. Ringo writes, “I never had a bathroom in Liverpool.” In New York as they took American by storm the following month, we see Brian Epstein and George Martin sporting ridiculous Beatle wigs, John wearing strange glasses and a hat, and Paul vamping in shades and unbuttoned shirt like a young Elvis (above). This is a world of hotel rooms and limousines. There's nobody else around except The Beatles and their inner circle.

Fans appear intermittently, like a carload of excited teens somewhere between Washington and Miami. There are shots of police cars escorting them, and even a toll booth, which blew Ringo's mind. He found Murray the K “great,” but unsurprisingly thought Phil Spector “really weird.”
Most of the Beatles photos are in black-and-white though a few, like Miami in February 1964, are in glorious colour. They're snapshots of friends, vacation pictures we all take, like the one of Ringo, his first wife Maureen, John and Cynthia proudly holding some fish they caught on a trip.

Ringo's companions were, of course, The Beatles, but you won't find revealing moments here that'll deepen your understanding of his old band. There are a few shots of John and Paul singing during the sessions for A Hard Day's Night, but disppointingly Ringo's text offers no insight into these moments. 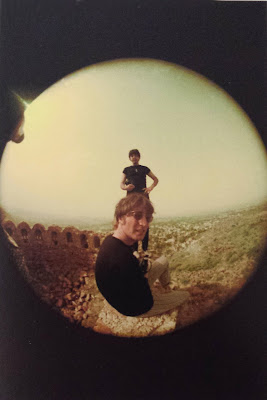 One highlight are the pictures taken from a little-known stopover in India during the Asian leg of their 1966 summer tour. Ringo snaps colour shots of his bandmates walking down the streets of Delhi using a fish-eye lens (above). The result is trippy and captures the mood of the era. It's the first time I've ever seen the Beatles in India in 1966. Another psychedelic effect is the prism lens Ringo uses during the Hey Bulldog session of February 1968.

After that, The Beatles are rarely seen. Instead, we glimpse Ringo with actor friends and on various film sets, such as Who drummer, Keith Moon, and singer Harry Nilson.

The Rowboat verdict: Photograph is fun viewing for Beatles fans and, while you learn more about Ringo, you won't gain any insight into The Beatles.