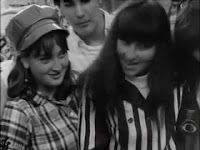 Reportedly Barbara Bach was there. Linda Eastman too. Like many other teenage girls at the time, they probably dreamed of marrying a Beatle, although I doubt very much either of them truly believed it could possibly happen. I wonder which of the four they fancied at that young age.

Meryl Streep (right, in cap) had a ticket as well, as can be seen in this news report from outside the stadium. She doesn't say much, her friends do most of the talking. But it's fascinating to watch a now-famous actress as a typical teenage Beatle fan.

Much has been written about that night, especially during the past week or so as we reflect on its 50th anniversary. Heck, there's even an entire book about that single concert. And having read so many words about this show, it's difficult to ignore its importance. Not only for the Beatles, but for concerts and music in general. This show opened the world to arena and stadium concerts. It was the first of its size and stature, but certainly not the last.

Some backstory: In 1965, Sid Bernstein was a New York promoter who offered Shea Stadium to The Beatles. Epstein turned him down, not believing that even his Beatles could fill a venue as mammoth as this. Bernstein, in a moment of inspiration and at incredible risk to his own finance, offered to pay ten dollars for every unsold seat. Luckily, his gamble paid off handsomely. So, on that hot August night, 55,600 people, mostly teenage girls, screamed their way through a 14-song performance that barely lasted 32 minutes. 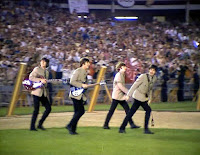 The documentary film of that evening captures the excitement and atmosphere. The nerves of the boys as they run across the pitch to the stage is palpable. It can be seen in the way they hold themselves, the way they break into short runs, the way in which they kick off their opening number. John had gone a bit mad by the end of the show, playing the organ with his elbows, throwing back his head and laughing uncontrollably in sheer joy.

When they were down and out, unknown and broke, they had a catchphrase, stolen from a TV commercial from the time. In response to John's "Where are we going, lads?" the others would chorus, "To the toppermost of the poppermost, Johnny!"

For Beatlemania, Shea was probably the toppermost. In 1970, Lennon fondly recalled, "At Shea Stadium, I saw the top of the mountain."

I used to work with one of Sid Bernstein's sons. He told me that in his home, under his bed, there were boxes of unsold tickets from the Shea Stadium show. Of course I tried to get him to send me a couple for my collection, but we were both overseas and I never managed to get any. Those tickets, however, were probably from a year later. Following Lennon's "bigger than Jesus" comment, there were 10,000 unsold seats for their Shea Stadium concert in 1966.

Beatlemania had peaked. The band who toured in 1966 had crossed the mountain and were now heading into the valley of psychedelia. World domination would continue from Abbey Road studios.
Posted by The Doc and the Guv at 05:00