The Stoner's Guide to The Beatles

"I think everybody's mind should be bent once in a while," said Bob Dylan in the mid-1960s. Dylan was the King of Folk on August 28, 1964 when he bent the minds of the Fab Four in their suite at the Delmonico Hotel in New York. Dylan, let's remember, was coming from the Greenwich Village folk scene of the early-1960s which was inspired by the reefer smokers of the Beat movement.

PLEASE PLEASE ME / WITH THE BEATLES / A HARD DAY'S NIGHT / BEATLES FOR SALE / HELP!


Possibly, The Beatles toked up when they cut their teeth in Hamburg between 1960-62, but if they did, it didn't affect them until Dylan sparked that fateful phattie. Most of the Beatlemania era is pretty "straight." Beatles' lyrics were about girls and love (like everyone in the top 30), and the arrangements were straightforward rock 'n' roll with a few ballads.

That said, a few songs from the Beatlemania era rock under the influence. I Feel Fine kicks off with shrieking feedback that'll blow your mind (and which helped pave the way for the distorted guitar of Jimi Hendrix), and Ticket To Ride, whose chiming guitars betray an Indian twang. In both songs, the guitars mesmerize the listener through your speakers or headphones. It's no secret that the band at this time was smoking pot "for breakfast," recalled John Lennon, and it's effect may have seeped into Ticket To Ride.

On a general note, the American Capitol mixes drenched in echo sound better to stoners than the dry EMI mixes. Echo sounds great when you're stoned. Listen to Roll Over Beethoven on The Beatles' Second Album where the reverb will blow your mind, then compare that to the the dry mix on With the Beatles where George's guitar sounds like an elastic band. 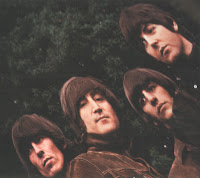 Instead,it took a full year for the creative and psychological effects of grass to affect visibly appear in their music. By the release of Rubber Soul in December 1965, John, George and Ringo (and to a lesser extent Paul) had tripped on LSD, which who colour Revolver the following summer.

The first clue is the album cover: stretched, distorted faces. The moptops are daytripping.

Most of the songs are still about girls, but the lyrics of Norwegian Wood, Girl and In My Life shimmer with symbolism and imagery. Nowhere Man doesn't even talk about love but alienation and identity. These weren't dance songs, but head songs. Music to make you think.

Sonically, too, the band was exploring. George's sitar in Norwegian Wood adds a new texture to the Beatles sound. The funky bass line in Drive My Car is a stone groove. I'm Looking Through You sweeps the listener away with its stabbing accordion notes and driving acoustic guitar.

And this is just the start.


Revolver is dipped in LSD. You first hear it in the Indian-like twang of Paul's searing guitar solo in Taxman; then in the sluggish, backwards guitar and sped-up John vocal of I'm Only Sleeping; George's Indian showcase of Love You To; the hard, trebly guitars of She Said, She Said and And Your Bird Can Sing; Paul's recounting his pot experience (always a step behind the others in substances) in Got To Get You Into My Life; and of course the stunning album closer, Tomorrow Never Knows which details an acid trip with lyrics lifted from the Tibetan Book of the Dead and LSD guru Timothy Leary.

Never before was there this much distorted and manipulated music on a Beatles record. Add to this the single that was recorded during these spring 1966 sessions, Paperback Writer and Rain, which featured heavy guitars, deep echo, backwards vocals and sluggish drums.

Start listening, though, with take one of Tomorrow Never Knows found on Anthology 2. It's stripped down and distorts John's voice so much he sounds like he's singing from another galaxy. This is one of the overtly druggiest songs in the entire Beatles cannon. Start here and float downstream...

An obvious choice. Pepper is the signature psychedelic album by The Beatles and from that era (which included the debuts of Hendrix and Pink Floyd, and Cream's Disraeli Gears). 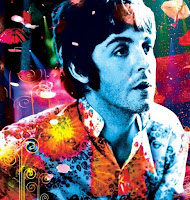 The elaborate soundscapes are meant to take listeners on a journey with each song evoking a different feeling. John's songs are particularly trippy, Lucy in the Sky with Diamonds and Being For the Benefit of Mr. Kite. No surprise, since he was dropping almost every day, as he revealed later.

However, Paul sets the album's tone with the title song featuring the hardest guitars heard on a Beatles album up to that point.

Other highlights include George's Within You Without You which features an extended duel between Western orchestral instruments and classical Indian ones that sounds hypnotic.

The most impressive song, of course, is the closer, A Day In The Life, which features a haunting Lennon vocal, sharp tempo changes, two orchestral rushes and a 42-second multi-tracked piano chord that sweep the listener through a harrowing five-minute sonic journey. The song remains the towering achievement in The Beatles career. 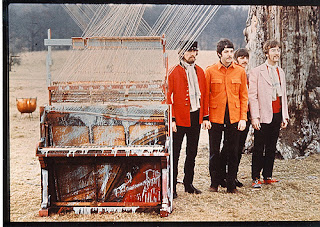 Really a soundtrack of the TV special mixed with the two singles from 1967. The MMT tracks are mediocre by the Beatles' lofty standards, but Fool on the Hill is a beautiful yet delicate ballad and I Am The Walrus is a brilliant yet chaotic acid trip, exploding with absurd imagery wrapped in a Dadaist soundscape.

Strawberry Fields Forever and Penny Lane represent a peak in songwriting and sound construction. They aren't so much songs but music collages that evoke vivid images and the whole gamut of emotion from melancholy to joy.

THE BEATLES (THE WHITE ALBUM)


There's a casual feel to this 95-minute sprawl that contrasts with the albums of 1966 and 1967 that took listeners on a trip. You need need to play The White Album from start to end. You can stop and start The White Album and jump around songs. The album was mostly written on acoustic guitars and overall offers a laid-back feel. One song doesn't melt into another as found on Pepper. For stoners, the rock songs should be heard in mono where they offer more punch than the stereo mixes. Also, the electric guitar shines on this album after being largely absent from the Pepper era. Highlights: Dear Prudence, While My Guitar Gently Weeps, Happiness Is A Warm Gun, side 3 and Revolution 1.


The last recorded album is the band's most modern-sounding and polished. Again, the electric guitar rules, and Paul's bass playing has never been as fluid. You hear this excellent marriage of Lennon's biting vocal and Paul's swampy bass on Come Together, a powerful rocker. A wall of guitars drive I Want You (She's So Heavy) and a three-way duel propels The End.

However, the Zen-like arrangement and beautiful harmonies of Because are heavenly. One of the best stoner songs by anybody. All of side 2 starting with Here Comes The Sun must be listened to in order as the momentum rises with each song fragment and sweeps away the listener.


This patchwork album offers a few gems for stoners. Across The Universe evokes the heavens in its lyrics and symphonic backing. Let It Be sounds sacred under the influence. I Me Mine features a biting guitar. The Beatles sound like a cool bar band in the Apple rooftop songs I've Got A Feeling and Get Back.
Posted by The Doc and the Guv at 05:00