Abbey Road Deluxe: What Should We Expect? 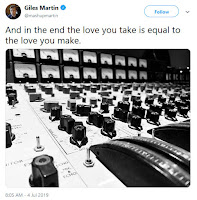 Following months of speculation from fans, Giles Martin tweeted the clue we had all been waiting for. Ringo then mentioned he'd be at Abbey Road in September for the launch, then later that he'd been listening to the new mixes. Finally, The Beatles website announced the Abbey Road remix and deluxe editions would be available in September.

We  have some idea what to sonically expect after Pepper and the White Album remixes. The original mix and production of Abbey Road, however, was always superior to that of its predecessors, so I'm not expecting the vast improvements I heard in the previous remixes.

The Beatles have already published a couple of tracks on YouTube; the three versions of Something. I've only listened to it on my PC's speakers, but to these ears the Giles remix of the released track is warm, with more upfront vocals and organ, and clarity in bass and drum tone. Two thumbs up from me.

The 5.1 is a different matter. I suspect that will be a revelation after the amazing surround sound of The White Album last year. Will the guitars in The End swirl around the room?

But what can we expect from the bonus tracks?

My first thought was how unsurprised I was by the track-listing. Alternate takes, a couple of demos and instrumental/orchestral only versions. Following the White Album and Get Back sessions, these sessions were structured, much like during the recording or Pepper. As such I didn't expect too much in the way of jams or Chuck Berry covers.

I was also pleasantly surprised at how much was previously unreleased and hadn't been repeated from Anthology 3.

While we can't be certain, here's our thoughts on what's to come.

1.     I Want You (She’s So Heavy) (Trident Recording Session & Reduction Mix)
Recorded at Trident on February 22, takes 8, 20 and 32 from this session were edited into a single track, ready for later overdubs before inclusion on the original album. I presume this mix is what is being released here.

2.     Goodbye (Home Demo)
We’ve had this on bootleg since the early-90s. I’m looking forward to a pristine release. This could have worked really well as the coda on Abbey Road, had it not been for Her Majesty.


The Beatles' YouTube channel has already published this one. A different mix to the Anthology 3 version, with a more prominent piano.

4.     The Ballad Of John And Yoko (Take 7)
Paul and John recorded this on acoustic guitar and drums in 11 takes, five of which broke down. Take 10 was the best, and then overdubbed with bass, piano, more guitar and percussion. I expect this will be a stripped back “unplugged version” of this fine single.

5.     Old Brown Shoe (Take 2)
As take 4 was the overdubbed and released version, this should be a raw, complete run through of this song. Only the earlier George demo was released on Anthology 3.

6.     Oh! Darling (Take 4)
Take 26 was heavily overdubbed for the final release. All takes were recorded in the one session, so hopefully this is a fun, complete run-through. The version on Anthology 3 was from the earlier Get Back sessions.

7.     Octopus’s Garden (Take 9)
This is unlikely to be much different from the Anthology 3 version, which was an edit of takes 2 and 8. And considering they previously had to create a new version for Anthology 3, I suspect this is looser. Perhaps it’s more fun, although I suspect its inclusion is purely because they had to include Ringo somewhere.

8.     You Never Give Me Your Money (Take 36)
Another basic track with an abrupt ending, ready to be inserted into the medley.

9.     Her Majesty (Takes 1-3)
Only two takes were complete, and take 3 was released. With only guitar and vocal, I’m not expecting much in the way of remix revelations. The song is only 23 seconds long, however, so there could be chatter, comments and laughs between takes.

10.  Golden Slumbers/Carry That Weight (Takes 1-3 / Medley)
I presume this will be another basic-track version featuring only Paul, George and Ringo. (John was in hospital at the time.) As they’ve included all three takes, I suspect this will include the breakdowns. Take 15 was later overdubbed for release.

11.  Here Comes The Sun (Take 9)
John was still missing, so this will probably be only drums, bass and guitar. I’m looking forward to this pre-overdub version.

What happened to Here Comes the Sun with George’s unused guitar solo which was seen on the Harrison documentary? They may have dropped the solo into this take. If not, it should have been included.

12.  Maxwell’s Silver Hammer (Take 12)
They played this a lot during the Get Back sessions, and they ran through 15 takes of this in the one session. It was familiar, to say the least. I’m not sure how different this will be to Take 5 from Anthology 3.


1.     Come Together (Take 5)
Take 5 was released on Anthology 3, and while I’m always happy to see another unreleased track, I again wonder how different this take will be. We'd rather hear John's fast, Chuck Berry-style demo, if that exists on tape.

2.     The End (Take 3)
This track was well-rehearsed, so expect a tight, basic tracks run through. The point of interest here will be the drums, as Lewisohn claims the solo on each take was quite different. Anthology 3 included a remix of the released version.

3.     Come And Get It (Studio Demo)
Previously released on Anthology 3, I hope Giles works his magic and brings more life to this wonderful track. Certainly one of the finest songs any of the Beatles gave away, this should have been on Abbey Road. I’d be happy for Maxwell's Silver Hammer to have been unreleased, or a single B-side in place of this.

Is it the only track McCartney gave away that he has revisited live?


4.     Sun King (Take 20)
Recorded in a single take with Mean Mr Mustard, expect a basic tracks version. I’m not sure how much of the lyrics were ad-libbed, so there could be new invented words to ponder.

6.     Polythene Pam (Take 27)
In a similar fashion to Sun King/Mean Mr. Mustard, Polythene Pam and the following track were taped together. Again this should be a basic track – perhaps with some of John’s notorious fluffed lines in that thick Scouse accent he affected.

7.     She Came In Through The Bathroom Window (Take 27)
Basic tracks – see previous track.


Anthology 3 included the vocals only mix of the released take 16. This version should simply be harpsichord, bass and guitar.

9.     The Long One (Medley: You Never Give Me Your Money, Sun King, Mean Mr Mustard, Her Majesty, Polythene Pam, She Came In Through The Bathroom Window, Golden Slumbers, Carry That Weight, The End)  (Trial Edit & Mix – 30 July 1969)
Constructed from rough, incomplete stereo mixes in order to test the medley's flow, this has been bootlegged in a heavily distorted version. Her Majesty is restored to its original place. Again, I’m looking forward to hearing this in its simpler form. Not expecting any surprises, just clarity.


Another one the Beatles have already published on YouTube. It’s warm, luscious and full of surprises. A stunning arrangement with elements that were lost in the final mix.

While some have asked why Take 39 with the extended jam hasn’t been included, I don’t mind that it’s missing. This has been bootlegged extensively, and frankly it’s repetitive and dull. No great loss.

12.  Golden Slumbers/Carry That Weight (Take 17 – Instrumental – Strings & Brass Only)
After not looking forward to these “strings only” releases, after none of the Beatles are on them, I’m surprised at how much I enjoy them. Maybe it’s simply to appreciate the amount of work that was put into the final product.
Posted by The Doc and the Guv at 03:07